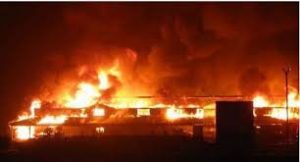 Gas dealers on Abeokuta Street in the Kaduna North Local Government Area watched helplessly on Saturday as their property, valued at millions of naira, went up in flames as fire gutted about 10 shops.

One of the dealers, Nwanbude Chukwudalu, said the fire was caused by an electric spark in one of the shops.

He said, “The fire started from a neighbour’s shop. He was refilling gas (Liquefied Petroleum Gas) and at the same time, testing an electric cooker. There was a spark from the electric cooker and before we knew what was happening, flame covered everywhere and the cylinders started exploding.’’

A team of police officers from Magajin Gari Police Division promptly arrived at the scene to forestall any breakdown of law and order from angry youths in the area.

The youth had waylaid the vehicle of a fire service team from the Kaduna State University for not responding promptly to calls when the fire started.

The team, led by a Deputy Superintendent of Police, R. A.  Adegbite, urged the youth to always manage their anger when emergencies occurred.

Also, the Area Commander, Metro Police, Kaduna State, identified only as ACP Abdulazeez, cautioned those dealing in gas to invest in safety measures. He said, “It is unfortunate that people still engage in gas business without any safety measures even if it’s just to invest in fire extinguishers.

Another shop on Ibadan Street was also destroyed by fire. It was learnt that the shop stocked in electric bulbs and other appliances was destroyed after an inferior bulb reportedly  exploded.

The spokesperson for the police in the state, ASP Muktar Aliyu, could not be reached for comment as calls to his mobile rang out. The gas fire was still on as of the time of filling this report at 9pm.