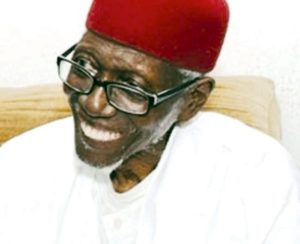 SECOND Republic Senator Hassan Adisa Fashinro is dead. He passed on at exactly 8.29pm yesterday after a brief illness. He was 99.

Lagos State Governor Akinwunmi Ambode was saddened by the death of one of the founding fathers of the state.

Popularly called HAB, Pa Fashinro was the first Clerk of the Lagos City Council. He would have clocked 100 years by September.

In a statement signed by his Chief Press Secretary, Governor, Mr. Habib Aruna, the governor describe Pa Fashinro as one of the great founding fathers of Lagos, saying that he was one of the main architects of the state.

The statement reads: “This is a very sad loss, personally for me and for every Lagosian. I was personally looking forward to celebrating Papa at 100 later in September this year, but we cannot question God for calling him at this time.

“Papa was a hero. He was a father in the true sense of the word. We cannot write the Lagos story without recourse to the roles that he played from the start and from the bottom of our hearts, we appreciate the role that he played in building Lagos to what it is today.”

Commiserating with the family of the late elder statesman, Ambode urged them to uphold the ideals he stood for, saying that the nation will continue to draw inspiration from his life and times.

“His demise, just like that of our heroes past, must never be in vain. There can be no better time to unite together to achieve a better and more prosperous Nigeria,” he said.

The governor said Pa Fashinro paid his dues and has left his footprints on the sands of time, saying: “On behalf of the government and people of Lagos State, I want to express our heartfelt condolence to the family of Pa Fasinro on this great and irreparable loss. He was a pride to our country, our state and we will surely miss him.”

The former Lagos City Council clerk lived an eventful life for a century.

The advantage of long life conferred on him the privilege of knowing much about Lagos and its environs. It is gratifying that he had developed his knowledge of the ancient and modern ‘Lago de Kuramo’ into history books for the instruction of the younger generation.

He died a fulfilled man. He was an author, politician, community leader, lawyer and servant of Allah.
He witnessed the royal intrigues heralding the return of Eleko Esugbayi, the brief reign of Alayeluwa Matiku Olusi, the tragedy of rejection suffered by Prince Adedoyin Dosunmu Temiyemi, the installation of Oba Falolu, Oba Adele, Oba Adeyinka Oyekan and Oba Osuolale Akinolu

Fashinro made history as the first Lagos Town Council Clerk in 1950. The celebrated council was an administrative unit of Lagos created in 2950 under a new Local Government Law in succession to the council created by the 1941 Ordinance.

He was a witness to the bickering and power tussles between the defunct AG and NCNC chieftains during the council chairmanship election. The poll was won by Olorunnimbe Ibiyinka of the NCNC. The Eleko, Oba Musendiku Adeniji Adele, a councillor, was defeated. The monarch later left the council when Ibiyinka deprived him of due royal acknowledgment.

Fashinro also witnessed the reorganisation of the Town ouncil by Premier Obafemi Awolowo.

He was also conversant with the circumstances surrounding the abrupt resignation Of Adeyemi Lawson as council chairman and the emergence of Ganiyu Dawodu as new helmsman.

Fashinro’s belief was that the local government should be a training ground for future leaders at the state and federal levels.

He was an Awoist, held in honour by the old progressive bloc. In 1983, he was elected a UPN senator to replace Senator Sikiru Shitta-Bey, who had defected to the NPN. He only spent three months in the Upper Chamber. His senatorial career was terminated by military coup.

But, God later compensated him. His son, Habeeb, was elected into the House of Representatives for eight years.

Fashinro was born on September 13, 1919. He attended Ereko Methodist School, Lagos and Eko Boys High School, Lagos. In 1948, he travelled abroad to study law. He was called to bar in 1951.

The deceased serve as the vice president of the Anwar Ul Islam under the late Chief Shafi Edu, and later, president between 1987 and 1990.

He will be mourned by Lagos Muslim faithful and members of the political class, particularly the old order.