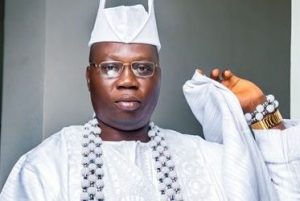 Aareonakakanfo of Yorubaland, Iba Gani Abiodun Ige Adams on Friday condemned the Department of State Services’ failure to present all the 12 aides of Yoruba nation agitator, Chief Sunday Adeyemo Igboho before the Federal High Court in Abuja on Thursday.

Igboho’s aides were arrested on July 1, during the nocturnal raid of his Soka residence in Ibadan.

But the DSS on Thursday said it had only three of the aides in custody as against the initial 12 reported in the media.

Adams in a statement by his Special Assistant on Media, Mr. Kehinde Aderemi, said the conduct of the secret police truly showed a complete affront on human rights.

Wondering why it has taken the DSS so much time to investigate the circumstances surrounding the ugly incident where two of Igboho’s aides were allegedly killed, the Yoruba generalissimo insisted that the DSS had exhibited pure neglect and arrogance that are capable of discrediting the image of the secret police

He said, “Our constitution is clear about the rights of every citizen that anybody arrested must be taken to court latest 24 hours after his arrest and such rights must be protected under the law. It is sad and most unfortunate that the DSS had arrogated to itself covert power that usually reminds us the inglorious years of the military where citizens rights have no basis in their law.

“Therefore, the DSS failure to present Igboho’s aides in court for the second time was a flagrant display of lawlessness and gross injustice. Ideally, it is only the President and the vice president of the country that have that immunity as provided by our constitution. So why is the DSS finding it too difficult to allow the constitution to take its course as it is done in other climes.”

Adams, however, urged the DSS to be transparent in the discharge of its responsibility, adding that the case against Igboho is so sensitive in nature that the secret police as an institution could now claim to be above the law.