General, others killed as Libyan fighters team up with ISWAP in Northeast 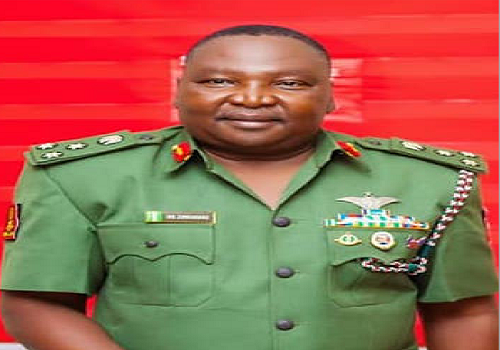 Libyan mercenaries  are believed to have joined forces with  insurgents of the Islamic State of West Africa Province (ISWAP) in the Northeast as the terrorists seek to recover  lost grounds ,The Nation gathered yesterday.

The insurgents struck afresh in Askira,Borno State, yesterday killing a brigadier general and three of his soldiers.

The attack came 24 hours after military airstrikes took out several top commanders of ISWAP  while they were allegedly holding a strategic meeting with their  new leader, Sani Shuwaram, at Sabon Tumbun and Jibularam, in Marte Local Government Area of the state.

The fate of Sani Shuwaram following the airstrikes could not be immediately ascertained.

The Army named the general as Dzarma Zirkusu,who until his death, was the commander, 28 Task Force in Chibok.

The three soldiers killed with him were not named.

They were on their way to Asira-Uba from Chibok when they  ran into an ambush laid by ISWAP. A  top source said  intelligence report indicated that some Libya-based mercenaries were among the ISWAP fighters in the North – East corridor.

The source said the soldiers were killed in an ambush by ISWAP insurgents who were suspected to be on a vengeance mission.

“Our military jets had neutralized many leaders and ISWAP insurgents on Friday and they attempted to fight back by attacking towns and villages, especially Askira Uba town which they tried to seize,” said the source.

“Following a distress call to 28 Task Force in Chibok, the commander, a Brigadier-General mobilized his troops for a reinforcement shuttle to Askira Uba.

“It was while on their way that the Army General and the troops were ambushed. But intelligence indicated that the General and the soldiers resisted move to abduct them. It was learnt that in annoyance, the ISWAP insurgents killed them.

“Ordinarily, an army General ought not to lead any reinforcement but the heroic Commander decided to lead by example.”

Responding to a question, the source added: “ISWAP has been striking in the North – East corridor because some Libya-based mercenaries dominate their ranks.

“I can assure you that Nigerian troops are up to the task. With Boko Haram decimated and Abubakar Shekau smoked out, the end of this war against insurgents is near. We will now face ISWAP squarely.”

The source said the bodies of the fallen soldiers had been evacuated to Maiduguri.

The  Director of Army Public Relations, Brigadier General Onyema Nwachukwu,confirmed the death of the army officer and his men yesterday.

He said: “Troops of Joint Task Force, North East Operation HADIN KAI have neutralized several Islamic State West Africa Province (ISWAP) terrorists during a recent encounter in Askira Uba Local Government Area of Borno State. In the fierce encounter which is still raging as at the time of filling this report, troops supported by the Air Component of OPHK have deployed five A – Jet, two A-29, two Dragon combat with which they destroyed nine Gun Trucks and One APC.

“Sadly, a gallant senior officer Brigadier General Dzarma Zirkusu and three soldiers paid the supreme sacrifice in a very rare display of gallantry as they provided reinforcement in a counter offensive against the terrorists, and successfully defended the location. The families of the senior officer and soldiers have been contacted.

“The Chief of Army Staff Lt Gen Faruk Yahaya, deeply commiserates with the families and relations of the fallen heroes. He has also directed that the troops continue in the ferocious counter offensive and hot pursuit to eliminate the remnant of the fleeing terrorists.”

Online publication HumAngle, quoting sources in Askira, said  the insurgents who attacked the town yesterday  drove into town  in 13 gun trucks and “began to attack the military base near the town.”

Time was about 9am.

Some of the terrorists  started shooting and setting buildings on fire before the military arrived to  confront them.

It also quoted Borno State House of Assembly Deputy Speaker, Abdullahi Askira, who is from the area as saying: “We had earlier received an alarm from our people who are mostly farmers that  they sighted scores of terrorists all armed, driving from Nguide axis as they headed  for Askira,”

Abdullahi Askira said the  troops “tried their best because they engaged them effectively even before the air force jet arrived.”

He said many buildings  were burnt “but luckily none of the residents of Askira was killed during the attack.

“But on a very sad note,we learnt that a senior military officer that led the reinforcement  team from Chibok was said to have died during  the fight.”

Hassan Chibok, a community leader in the neighboring Chibok council, said a classroom building and other structures were destroyed by the extremist insurgents.

“The primary school (in Askira Uba) was burned down. The primary healthcare center was also burned down, and the house of the village head,” he said.

It was also gathered that another group of terrorists attacked Mulai village, close to Maiduguri and rustled some cattle while another gang of fighters attacked a communication mast and health centre in Buni Yadi, Yobe State and stole a  generator set and drugs.

The invasion sent  many residents fleeing.

ISWAP has been desperately trying to  consolidate its  position in the Northeast after getting rid of  Boko Haram leader Abubakar Shekau and despite the elimination of its own  leaders  Abu Musab al-Barnawi and successor Malam Bako – one after the other.

Askira is about 150 kilometers south of the state capital,Maiduguri and sits on the fringes of Sambisa Forest where  ISWAP and Boko Haram operate from.

They are martyrs’, Buhari in tribute to  fallen general, three soldiers

President Muhammadu last night  mourned the Commander of the 28 Task Force, Chibok,Borno State , Brigadier General Dzarma Zirkusu and his three soldiers, who lost their lives in a battle with terrorists in Askira Uba, earlier in the day.

Buhari hailed the deceased for their bravery and described them as martyrs.

Nigeria, he said in a statement issued by his Senior Special Assistant on Media and Publicity, Mallam Garba Shehu, had lost brave soldiers.

“Nigeria has lost brave soldiers. I salute their courage. May their souls Rest In Peace. General Zirkusu leaves us sad and devastated. The soldier in him will remain immortal,” he said.

The President urged the Chief of Army Staff, Lt. General Faruk Yahaya, to accept his heartfelt condolences and that of the nation, and convey same to the members of the families of those martyred.

“I pray to the Almighty to give you and the bereaved families the strength and courage to bear this irreparable loss,” the President added.

Borno Governor, Professor Babagana Umara Zulum, has commended the Nigerian military for putting up a strong resilience in a battle with fighters from the Islamic State of West Africa Province, who launched attacks on a military base in Askira/Uba Local Government Area of Southern Borno State, on Saturday morning.

Governor Zulum, in a statement by his spokesman, Malam Isa Gusau, paid tribute to troops at the base as well as troops from neighboring commands, who mobilised to provide reinforcement before they were ambushed.

Governor Zulum, while commiserating with the military over the loss of some military officers and personnel, thanked the fallen heroes for what he called “their supreme sacrifices to the Nigerian Nation”, declaring that “the people of Borno will remain forever grateful to them and all fallen heroes, and will remain fully supported of gallant troops currently operating in front lines”.

Zulum amid the loss of some officers and personnel, the military was able to mount heavy resistance and recorded gains which the state is proud of.

The Governor commiserated with affected residents for the trauma caused by the attack and shared the pains of anyone who may have turned victim directly and otherwise.

“Today’s unfortunate incident in Askira-Uba local government area reminds us while our military, other armed forces, volunteers and all stakeholders make combined severe efforts towards peace-building; while many insurgents surrender their arms to tow the path of peace and while reclaimed communities witness return of peace and access to livelihoods, some insurgents are hell-bent on ensuring we do not fully regain peace. The goal of these categories of insurgents should challenge us to remain focused and ceaselessly commit ourselves to supporting our troops in many ways, particularly with logistics on the part of Government, and with credible information and prayers on the part of all of us as people of Borno State. We must always affirm our fates in our armed forces, while the armed forces must remain up and doing. We must always recognize what we already know that insurgents are always plotting with the elements of surprise. Our troops must redouble efforts to be ahead of insurgents. I salute our troops for the resistance put up today. I salute troops who mobilized to provide reinforcement. I salute the sacrifices of some officers and men we lost today and share the grieves of the immediate families and the Nigeria military. We thank these fallen heroes for their supreme sacrifices to the Nigerian Nation. The people of Borno will remain forever grateful to them and all fallen heroes, and will remain fully supported of gallant troops currently operating in front lines” Zulum said as quoted in the statement.