Get “CHARMED” in the cinemas 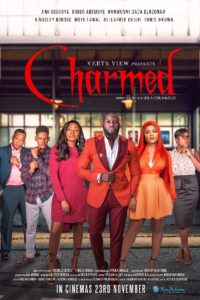 CHARMED, a new movie from the stable of Verte View had it’s premiere last Thursday, 22nd November 2018 at the Genesis Deluxe Cinemas, The Palms, Lagos.

CHARMED is the story of David Hale a successful and cocky young man who has everything going for him until he suddenly begins to experience a run of bad luck after an encounter with the uncoordinated and carefree Lola Thomas.

We all have negative “cause and effect” experiences either personally or through interactions with family and friends. Some people say it is Karma; some call it fate while others associate it with mere coincidence. But generally, the overpowering goal usually is to unravel the mystery (if any), resolve the issue and get back on course. CHARMED explores themes on friendship, love, ambition and career.

The well-attended premiere had in attendance the movie’s cast and crew, and stakeholders in the Nigerian entertainment industry.

CHARMED which was released in cinemas across Nigeria on 23rd November 2018 is written by Kemmie Ola, produced by Benjamin Abejide Adeniran and directed by Adeola Osunkojo.

Verte View is a Nigerian film production and film distribution company based in Lagos, Nigeria. CHARMED is our second production and first feature movie. We are uber excited about this project and are looking forward to gracing your screens with more quality entertainment.