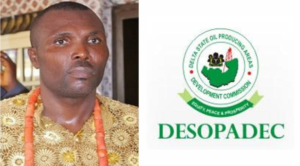 An anti-corruption group, Centre for Human Rights and Anti-Corruption Crusade (CHURAC) has approached a Delta State High Court sitting in Warri urging it to nullify the appointment of Hon. Michael Diden popularly known as Ejele by Governor Ifeanyi Okowa as the Chairman of the Board of the State Oil Producing Areas Development Commission (DESOPADEC).

The case with suit No. W/154/2019, the group said the appointment of Ejele as DESOPADEC chairman considering the fact that the former chairman of the board, Chief Godwin Ebosa, hails from the same ethnic nationality (Itsekiri) with the former thus negates the provision of the act establishing the interventionist agency.

In a statement issued by the Member, Board of Trustee/Publicity Secretary of the group, Mr. Oyinkedi Fuofegha, said the case has been slated for hearing on the 19th of August, 2019 at the State High Court in Warri.

It maintained that Governor Ifeanyi Okowa by virtue of the provisions of Section 7(1) a, b & c and (2)a & b of the DESOPADEC Law, 2015 (as amended in 2019) cannot validly appoint the Ejele (4th Defendant) as Chairman of the commission when the governor had previously appointed the former chairman from the Itsekiri Ethnic Nationality.

The suit filed on behalf of the claimant by J.P Oromoni is seeking the declaration of the court to compel Governor Okowa (1st defendant) to withdraw the appointment of the Ejele (4thDefendant) as he is not qualified to be appointed as board chairman pending the determination of the substantive suit.

According to it, “That by virtue of the provisions of Section 15(1), (2) a & b and (3) of the Delta State Oil Producing Areas Development Commission Law, 2015 (as amended in 2019) the 1st Defendant cannot nominate for appointment any person as a member of the Governing Board of Delta State Oil Producing Areas Development Commission (DESOPADEC) whose ethnic nationality produced the immediate past Board Member of the same office.

The group further prayed the court that by virtue of Sections 2, 7(1) a, b & c and (2) and Section 15(1), (2) a & b and (3) of the Delta State Oil Producing Areas Development Commission Law, 2015 (as amended in 2019) no Ethnic Nationality who has produced or is producing either the Chairman, the Managing Director or the Executive Directors can succeed itself without following the rotational circle as provided in the Law.

While also urging the court to compel the defendants to put up an appearance within 30 days after service of this summons on them, inclusive of the day of such service cause an appearance to be entered for them and file any other process in response to this summons which is issued upon the application of the Originating Summons of the Claimant.

Ejele was sworn in as chairman of DESOPADEC board alongside 16 others on July 31th by Governor Okowa in Asaba, the state capital.