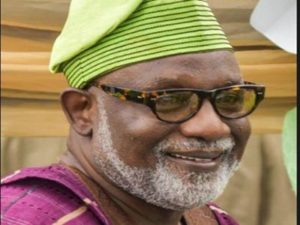 A group, the Ondo Movement for Accountability and Good Leadership (OMAGL), has urged the national leadership of the All Progressives Congress (APC) to clear the air on the status of Governor Rotimi Akeredolu in the party. The group recalled that the governor was suspended, shortly after the last general elections.

OMAGL said APC members and Nigerians in general had the right to know the outcome of the suspension, whether it had been vacated or it is still subsisting. The group said that both the party which presented him for election and the governor himself are accountable to Ondo State people and Nigerians.

The movement, in a statement by its National Co-ordinator, Abiodun Fanoro said: “The public deserves and wants to know if the suspension is indefinite. If it has been lifted, how was it resolved. Was any panel set up to investigate the alleged offences allegedly committed that led to his suspension? What are the findings? Is the governor exonerated or found guilty and if found guilty, what are the sanctions and if not guilty, why has the party not apologised to him?”

The group contended that the suspending a governor from his party was a serious matter that ought not to be trivialised or swept under the carpet as the sealed lip kept by the party had suggested.
It added: “The failure of APC to come out with a clear statement on the culpability or otherwise of Governor Akeredolu goes to establish two statements of which one must be authentic and correct. One, it is either the party is taking its members and the electorates for a ride; that they don’t matter when it cones to election as a result of its refusal to take action on the allegations against the governor, or the governor did nothing wrong and the party is merely crying wolf.

“Is APC naive not to know that it is going to meet Ondo State people, especially the electorates, who are enlightened, highly conscious and sophisticated, at the poll soon? Or is the party saying the people have no choice where you have a now well re-positioned Peoples Democratic Party? APC is surely digging its own grave by some of these in-actions.”

According to OMAGL “Although it is unbelievable, we tragically re-called that the famous lawyer, Dr Tunji Abayomi, an APC member, contested for the Ondo North senatorial seat on the platform of the Action Alliance even as Pro-Chancellor and Governing Council Chairman of the Adekunle Ajasin University, Akungba. To confirm the ineptitudeness of the party and lack of respects for its members, Dr Abayomi still remains on his seat at the university, seven months after the election.”

The group maintained that the continued silence of Akeredolu would do no good to his person, his office, his credibility and his future ambition in the state.

It added: “In other climes where elected public officers are accountable to the people, such public officers in the shoe of Akeredolu would have since the past seven months addressed the people and told them the true position of the matter. It is a high contempt for the people that the governor has continued to keep a sealed lip on the question of his suspension by his party, the APC.”