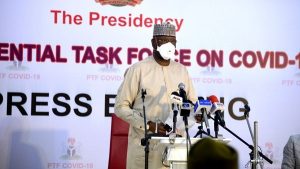 This article is premised on the responsibilities of the federal and state governments in the management of COVID-19 pandemic. It has become necessary to reflect on this in the light of the recent sudden upsurge of the disease and the allegation by the Presidential Task Force on COVID- 19 Pandemic, that states are not living up to expectation in the battle to minimize and ultimately eradicate the pandemic.

With the arrival of the disease in Nigeria in the first quarter of 2020, the federal government rose to the occasion in meeting the challenges posed by the virus. It set up immediately, the Presidential Task Force (PTF) which along with Nigeria Centre for Disease Control (NCDC) formulated the policy, guidelines, and directives to coordinate all activities relating to the control and elimination of the virus.

Both the NCDC and the PTF have discharged their responsibilities in keeping the nation abreast of all happenings in the related matter, coordinating the states in this regard, and where applicable, complementing the efforts of the states and other related institutions.

At the peak of the first phase of the pandemic, Nigeria like most countries was forced to embark on lockdown culminating in closure of schools, markets, and transport systems in addition to minimising of all forms of social interactions. Besides, the economies of all countries, including Nigeria, were adversely affected while medical facilities in some instances were over stretched.

However, with respite or improvement from the lockdown, some restrictive measures were gradually relaxed until finally, Nigeria was completely out of the first lockdown.

Unfortunately, with the relaxation of the safety precautions on the pandemic especially at the state and local levels by the authorities, nonchalant attitude of the people either due to ignorance, foolish pride and marked reduction in the compliance levels to the safety measures put in place by the authorities, the virus appears to be on its way back with greater force. The situation is even more compounded with the erroneous belief in some quarters that the virus never existed and of it does, could not survive in hot climatic zone of Nigeria. Besides, there is this misplaced idea that government officials are out to make fortune from COVID-19 pandemic which according to some people is nothing but another name for malaria.

Whatever the perception is, the indisputable fact is that there is a worldwide epidemic ravaging and destroying mankind and the economies and this is in the upward trend.

With the resurgence and the onward prowl of the disease in the country and in fact worldwide, concerted and coordinated actions and efforts become imperative if mankind will not go extinct. In Nigeria, there is absolute need to do the needful. Whether we like to say it or not, the nation is in a state of emergency. All hands must be on deck and we all are stakeholders.

However, the federal and state governments must take the lead and Nigerians must as a matter of necessity follow the leadership as directed.

Without equivocation, it is safe to say that both the NCDC and the Federal Task Force on COVID-19 have performed creditably in spite of some obvious handicaps and challenges. With daily reports on the extent of the disease nationwide and globally with regards to deaths, survivals and preventive measures, both organs no doubt lived up to expectation. However, their limitations stemmed from the fact that they lacked the powers to enforce what must and should be done especially, where state governments are involved.

In short, they are incapacitated to a degree when it comes to implementation of their recommendations in states. Both the NCDC and the task force initiate, where applicable policies, guidelines and directives on the disease leaving the implementation at the doorstep of the states. However, it has been observed that in some occasions where expediency demands, these agencies have intervened in the implementation process of some states with regards COVID-19 for sanity purpose. Kano State is a case in point where intervention became imperative when things were falling apart and the death surge became alarming.

Like the task force and NCDC, few of the states, like Lagos, Kaduna, Rivers, Akwa-Ibom and Federal Capital Territory deserved accolades as well. In them you see commitment. Nevertheless, there as well some states barely trying to meet up, while there are some who appeared onlookers and deceptive in implementation. A good example is Kogi which either out of self-inflicted ego, or abysmal ignorance of its chief executive, has refused to admit the presence of the disease in the Confluence State without convincing scientific proof.

Meanwhile, it is observed that some states are more interested in sharing the palliatives occasioned by the pandemic. Ironically, these palliatives allegedly end up in wrong homes or hands. Only recently, the chairman of the Presidential Task Force and the Secretary to the Government, Boss Mustapha announced that billions of naira were given to states by the federal government for this. According to him, no state got less than a billion naira with Lagos and FCT carting several billions each. He has in the same vein called on the states to justify the billions of naira given to them by carrying out more tests on the disease in their respective state.

The federal government should get the governors to assume their duties. The state governments on their part must impress on the local governments to brace up. Nigeria cannot afford another lockdown. This would be very devastating especially, to the economy of the nation. Let those responsible for enforcing the safety protocols directives be alive to their responsibility and any breach sanctioned.

While testing must be intensified, there is need for more isolation centres. While the federal government must keep its ears to the ground and eyes wide-opened, provision of adequate fund for all operations to rid the country of the pandemic must be guaranteed.