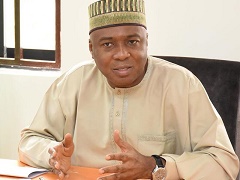 The Peoples Democratic Party (PDP) Caucus in the House of Representatives wednesday raised the alarm over alleged secret plot by some “dissident senators” led by Senator Ali Ndume, Senator Adamu Abdullahi and Senator Ovie Omo-Agege to illegally impeach the Senate President, Dr. Bukola Saraki.
This allegation is coming as the National Chairman of the All Progressives Congress (APC), Adams Oshiomhole, yesterday in the State House asked Saraki to vacate his seat following his defection to the PDP.

The federal government also yesterday reacted to Saraki’s defection from the ruling party, along with the Kwara State Governor, Abdulfatah Ahmed, describing the development as a relief.
Oshiomhole made the call while answering questions from journalists when he visited President Muhammadu Buhari along with APC senators.

The Senators, who were joined by the Senior Special Assistant to the President on National Assembly Matters (Senate), Senator Ita Enang, had converged at the Senate car park in the National Assembly premises before being conveyed in a 32-seater Hiace Coaster bus to Aso Rock.

Addressing journalists, the House Deputy Minority Leader, Hon. Chukwuka Onyema, along with other members said they received information that some senators who were aided by policemen planned to sit covertly and illegally to impeach the Senate president.

The National Assembly is currently on its long recess and is expected to resume on September 26.
Onyema said some members of the PDP Caucus went to the National Assembly complex to tidy up some committee businesses when they got wind of the alleged plot.

He added that his members would keep vigil to ensure that the unlawful impeachment proceeding do not happen.
“As you all know, the National Assembly is on recess but committee work is ongoing. We were busy doing our committee work when information was brought to us that the Senate chambers was being forcefully evaded by a couple of senators led by Senator Ali Ndume, Senator Adamu Abdullahi and Senator Ovie Omo-Agege.

“And their aim of the invasion of the Senate when all senators have gone on recess – they wanted to invade the Senate chambers to sit illegally and impeach the Senate president illegally when everybody is out on recess.”
“We also have it on good authority that they are planning to come back this night and tomorrowmorning aided by our own security forces that are meant to protect lives and property of Nigerians. They are now the ones aiding these dissident senators to truncate democracy.

“But we the PDP Caucus- minority caucus have decided that we are going to stay here, we’ll keep vigil and wait to see what is going to happen tonight and tomorrow morning,” he said.

Continuing, the House Minority Leader said:”We are calling on all Nigerians to stay awake with us because this is not a rape on the National Assembly but a rape on democracy which concerns all of us.

“And if we allow this to happen, then we might as well go back to when we had a military junta and forget about democracy,” he said.

The group also called on President Muhammadu Buhari to stop the attempt by the senators in question to thwart the present democracy.

Meanwhile, Oshiomhole asked Saraki to vacate his seat following his defection to the PDP last Tuesday.
Oshiomhole said his defection did not take him by surprise as the hint had earlier been made, saying he was happy however that Saraki admitted that he made efforts to address his grievances.