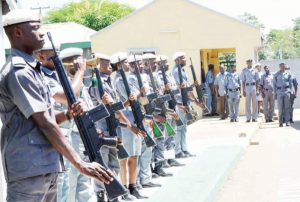 The confirmation of Nigeria Customs Service (NCS) that it spent N1.6 billion to recruit and train the 3,200 personnel it will engage soon.The recruitment exercise, which began in April last year, had stoked controversies due to the delay, alleged impropriety and fraud it threw up.

Vice-Chairman of the Senate Committee on Customs, Ade Fadahunsi, had accused the Comptroller-General of Customs, Hameed Ali, of paying a whopping N1.6 billion to a consultant for the recruitment of 3,200 personnel into the service.

But Customs spokesperson, Joseph Attah, said Tuesday that “dropping the figure as recruitment is misleading” and explained how the money was spent.

“The N1.6 billion covers the recruitment and training, including feeding of the 3,200 people, which will last for six months.

“For example, the feeding of 3,200 people is estimated at N2,000 each per day – breakfast, lunch and dinner (N6.4 million/day and N192 million/month), which is about N1.152 billion for the 3,200 persons for the six months. So, you can see that even the training alone has taken the chunk of the money.

“The process of recruitment and technical partners has a budget of about N300 million. We have not even talked about t-shirt, canvass, logistics, pay for resource persons and bonus for teachers (which are all part of the figure). So, dropping the figure as recruitment can be misleading,” he explained.

“I asked him if the Nigerian Army ever used consultants to recruit personnel and he said no. He said Customs officers are corrupt and he is bringing in a consultant to recruit 3,200 persons and he will pay the firm N1.6 billion.

“Are you recruiting five million people? The N1.6 billion is even in the budget and that is one of the reasons the budget was being queried by the leadership of the Senate.”