I can finish off Boko Haram without govt support – Sunday Igboho 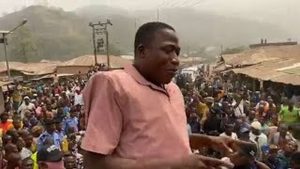 Popular Yoruba rights activist Chief Sunday Adeyemo aka Sunday Igboho has declared he has what it takes to fight against Boko Haram without the government’s support.

Igboho made this declaration in a video interview released in 2020.

He said: “That which I will use in the fight against Boko Haram, I have it already.”

The video resurfaced after the former Senator representing Kaduna Central, Shehu Sani, called on the Federal Government to invite Igboho to help drive Boko Haram terrorists out of the Sambisa forest.

Following the recent activities of Igboho, which he said were to rid the South-West region of killer herdsmen, Sani argued Igboho could help end terrorism in the country, particularly in the North-East, if given a chance.

He said the activist should be invited to help flush out Boko Haram sect from the dreaded Sambisa forest in Borno State.

Igboho has been in the news since he flushed out herdsmen in the Ibarapa area of Oyo State, blaming them for the cases of killing and kidnapping in the area.

He also visited Ogun State recently, saying he was in a community there “to help drive out killer herdsmen”.

The vast Sambisa forest is considered as one of the places the jihadist Boko Haram group uses as its base and keeps hostages.

In the 2020 interview, Igboho was quoted as saying that the Western Nigeria Security Network, also known as Amotekun, cannot be effective with government control over the outfit.

He said: “These herders we are fighting against, they are not after money, they only get orders from their leaders. Yoruba freedom fighters should not be kept under Governors, these governors will turn the fight against insecurity to business.

“Oyo State governor is of the Peoples Democratic Party, Osun, Ekiti, Ondo, and Lagos state governors are all of the All Progressives Congress and you want our own PDP governor here to support them, how will there be unity?

“And all the powers in this country belong to someone who is a Hausa-Fulani man. They established Amotekun and put it under a governor, the same governor that will request money from the federal authority.

“Yoruba youths only if we can be willing to fight. I am not asking for anything from anybody, what I will use in the fight against Boko Haram, I have it.

“I don’t need it from a governor because a governor will try to make money from it. He will claim he has spent a certain amount on Amotekun and makes a profit from it. This will not result in something good.

“When they wanted to start Oodua Peoples Congress, was it under any governor? Why is Amotekun meant to fight insecurity in the South-West, under the police?

“That’s rubbish; these people are not ready to fight for the Yorubas, they are simply looking for what to take from who.”

Igboho also said a time would come when people would rise to defend their lands.

He however added that people would definitely lose their lives in the fight while some would remain alive to enjoy the dividends.

He said: “A time will come we will all defend our boundaries. All these governors are betrayers, all they are after is how to make a profit and leave money for their kids.

“There’s no way people will not die when we want to attain freedom. No one can rise and say he wants to fight the government, we should unite. It doesn’t make sense that as freedom fighters, we stay under the government and earn a salary.

“When they started security outfits in the North, did they stay under any governor? Is Boko Haram under any government? These governors are looking for what to eat, they are thieves. They have sold out.”