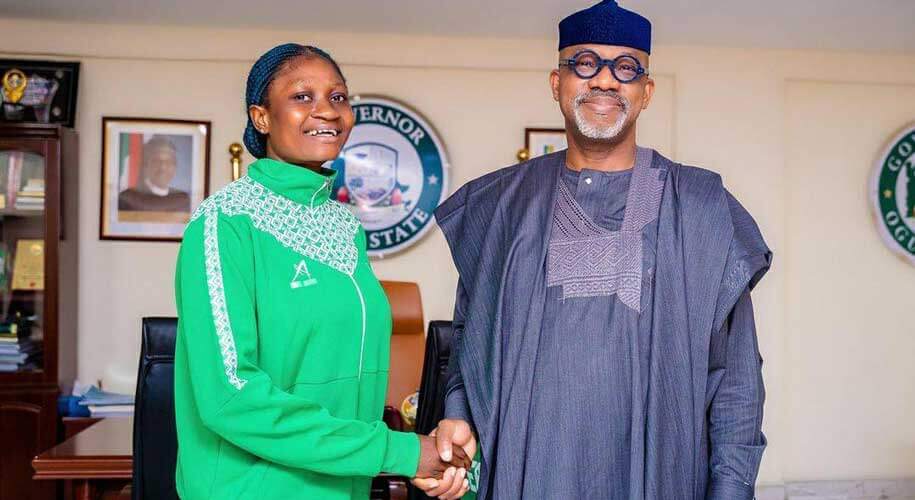 After over a year of representing Nigeria at the 2021 Tokyo Olympics, Nigeria’s finest female badminton player, Dorcas Adesokan, said she has not received any reward from the Nigerian government until, Ogun State Governor, Adedapo Abiodun, gave her N1m.

Adesokan was rated number 15 at the 2020 Badminton Women’s Singles at the Tokyo Olympics after losing her debut match to Spanish opponent Clara Azurmendi in the Group C game-year-old.

The 24-year-old said in an interview that she felt neglected after representing Nigeria with no form of reward from the Federal Government.

But she said the story changed when the Ogun State Governor invited Tobi Amusan, gold medalist at the 2022 World Athletics Championships in the 100 metres hurdles.

She set new world record of 12.12 seconds in the semifinal. It was followed up by a 12.06 record in the final to take the gold medal.

Amusan was named Youth Ambassador in Ogun State. Abiodun also rewarded her with a cash price of N5m and a house.

Adesokan said although she alongside other athletes were not part of the event; they were advised to find their way to the venue.

For her, the “impromptu event” restored her hope as a Nigerian athlete.

She narrated, “It was impromptu. Somebody called one of the coaches (Are Feyisetan) on Monday night that the Governor will be awarding Tobi Amuson yesterday, Tuesday October 5, 2022. They advised that we should also be there. So initially, we were not in the picture, it is because of the information that we went there.

“We had a bad reception because we were not part of the programme. We had to stay outside to wait, so many things. When they started the programme for Tobi I think, around 1.pm, we met the Commissioner and he said we should wait.

“We waited outside after Tobi’s programme, the Commissioner came outside and said the governor requested that we should come back some other time because we were not part of the programme. On our way leaving, the governor met us outside and he asked us to wait for him.”

Are Feyisetan, coach of the Nigeria Para Powerlifting Federation received N500,000 from the governor.

“We went to his office for like two hours. He apologized and told us that he was not aware we were coming. He said he would have awarded us alongside Tobi. He spoke well. He said he will be attending some of our tournaments, festivals and that we will be getting awards from the state government henceforth. And he said for our efforts, he will be rewarding us with N1m each. He gave the players and the coach N1m each, “she said.

According to her, not being appreciated after representing Nigeria at the Olympics was discouraging.

Adesokan added, “There was no reward since we came back from the Olympics. The only reward of appreciation so far is the N1m governor Abiodun gave us.”