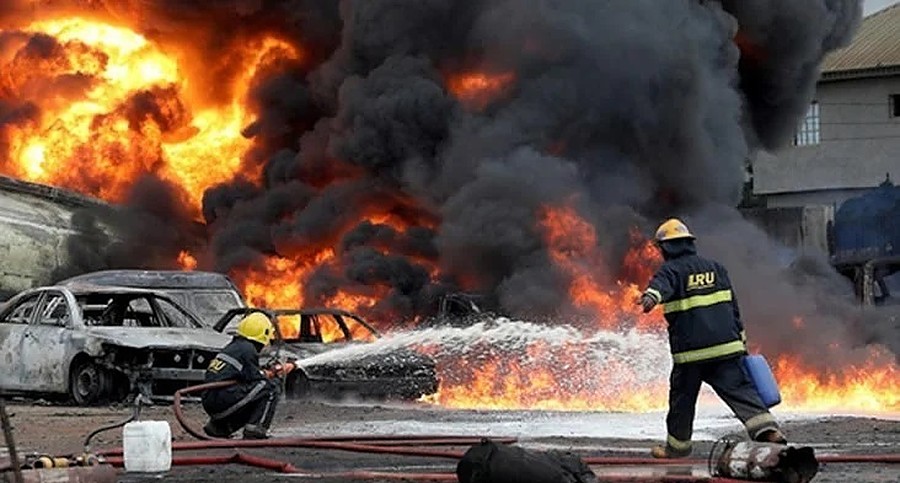 The driver of the petrol tanker which exploded close to the Nigerian Television Authority, Ibadan on Thursday night has been hailed by eyewitnesses for his bravery and expertise.

Eyewitnesses who spoke to our correspondent at the scene of the incident on Friday morning said the expertise of the driver and the prompt response of firefighters prevented the incident from claiming lives and destroying more property.

Some of the members of staff of the NTA at the scene of the explosion that the truck had a fault and the driver parked to fix the fault.

One of the NTA workers, Kehinde Igbari, said, “The explosion occured at around 7:58. We just finished reading the news at around 7:30 and not long after that, I think about 7:58, the incident happened.

” The fire started in the engine compartment with just a little spark. It started burning, the driver was ascending the hilly road and moving towards Gate area.

” I think he realised that driving the truck forward would result in great casualties , so, he decided to maneuver the truck to prevent it from entering NTA Network Centre and he turned the head of the truck and he did not jump out of the truck until he saw that the tanker had fallen.

” The destruction would have been massive if he had driven the truck toward Gate, which is a crowded area.

“We are grateful to God that we were not burnt and nobody died and none was injured. “

Another eyewitness, Wale Ojedokun, also said he parked his car by the roadside and saw the driver manouvering the truck.

He said, ” The driver really did his best to prevent loss of lives and destruction of more property.

” My car was close to where the truck was when the fire started. He reversed and made sure the trick did not enter into any of the buildings around there. I thank God for saving my life , I didn’t even lose my car.I give kudos to the driver.”

Governor Seyi Makinde was said to have gone to the scene of the incident early on Friday morning as the scene is about 100 metres to the entrance of the Government House.

The roads were also cordoned off from the Total Garden end and at NTA Junction.