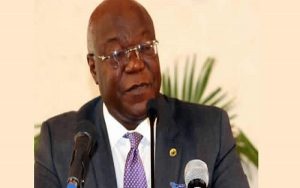 Vice-Chancellor of the University of Lagos (UNILAG), Prof. Oluwatoyin Ogundipe has said the death of the institution’s eighth Vice-chancellor, Prof. Oyewusi Ibidapo Obe came as a rude shock to the university Community.

In a statement, Ogundipe noted that Ibidapo-Obe, who died at 71 contributed a lot to the university’s development.

“The news of his death came to the University as a rude shock because of the great service and dedication he has put into developing the institution since he joined as a student in 1968, later as a staff and eventually as the 8th vice-chancellor (2002-2007). His commitment vision resilient and tenacious nature helped to shape the university in many ways.

“It is painful that professor David Appleby is exiting the world at the time that is experiencing the need for nation building. For us at the University of Lagos we take solace in his many enduring legacies footprints which will remain with us for many years to come,” he said.