ICPC to Partner INEC against Vote-buying 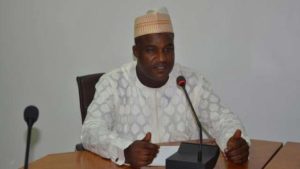 The Independent Corrupt Practices and Other Related Offences Commission has expressed its readiness to partner the Independent National Electoral Commission to tackle the menace of vote-buying in the electoral system.

Acting Chairman of ICPC, Musa Abubakar, made this known when he visited the INEC Chairman, Prof. Mahmood Yakubu, yesterday in Abuja.

Abubakar said that ICPC identified with INEC and Nigerians on the issue of vote-buying and was willing to work with the election management body to curb the ugly trend.
He said the commission was empowered to deal with all cases of corruption, including those committed during elections.

“The ICPC is empowered to investigate and prosecute any person involved in any act of bribery and corruption under any laws that prohibit corruption.
“I believe the Electoral Act also has provisions that deal with corruption and all forms of malpractices during the election.
“So, vote-buying is one of the corrupt practices under both our law and Electoral Act.
“The main reason for this visit is to identify with the commission and the general public on the issue of vote-buying.

“We assure you that the ICPC is ever ready to partner INEC to ensure that this trend is totally eliminated or reduced to the barest minimum,” he said.
Responding, Yakubu commended ICPC for its commitment to partner INEC to tackle “this new brand of electoral crime.”
He said that the commission was prepared to ensure that vote-buying did not determine the outcome of 2019 general elections.

“The votes cast by citizens will continue to determine who wins in our elections. We are focusing more on the processes leading to that outcome.
“The outcome of any election is in the hand of the voter, but we are responsible for ensuring that the process is free and credible,” he said.