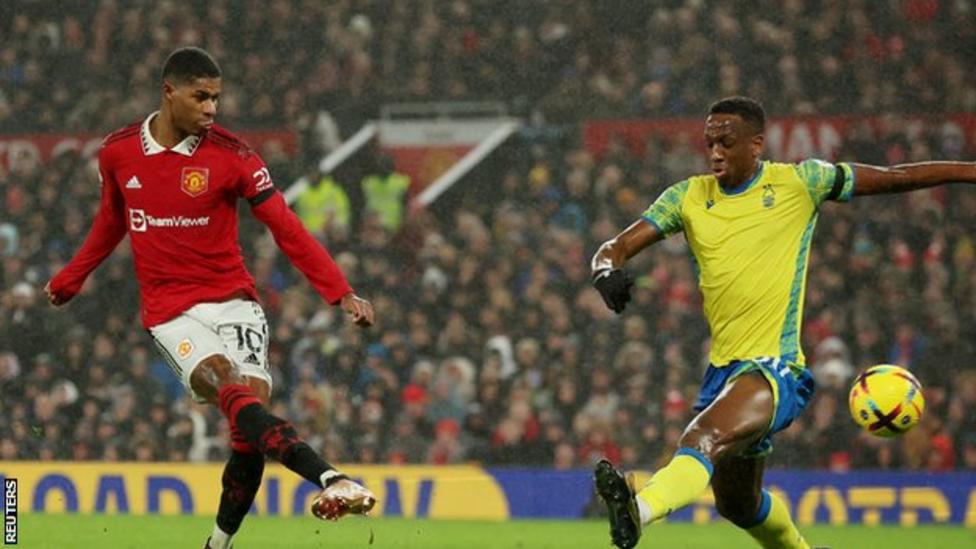 Marcus Rashford scored one and created another as Manchester United overcame illness issues to beat Nottingham Forest and move to within a point of the top four.

Rashford converted a superb opener after 19 minutes when he was picked out by Christian Eriksen in a pre-planned corner routine, allowing the striker to exploit Forest’s failure to track his run by sweeping a first-time shot past Wayne Hennessey.

The England forward turned provider three minutes later, cutting in from the left wing and rolling a pass to Antony Martial, whose low finish from the edge of the area found the net after Hennessey failed to hold.

Forest’s keeper denied Martial and Rashford before substitute Fred profited from an excellent through ball from fellow Brazilian Casemiro to find the bottom corner three minutes from time.

Forest never recovered from that first-half double blow, although they did have a goal ruled out by VAR just before the break.

Steve Cooper’s men have not scored a league goal away from the City Ground since 20 August and remain second bottom.

For United, it completed a fourth successive victory in all competitions and underlined the theory that the exit of Cristiano Ronaldo will not have a negative effect on the remainder of their season.

There has been a lot of talk of strikers at United since Ronaldo’s contract was terminated last month.

PSV Eindhoven’s Cody Gakpo was certainly on their radar before he agreed a move to Liverpool, even if the likely transfer fee would have priced him out of a move to Old Trafford, given the significant spending last summer that manager Erik ten Hag demanded.

Unless the situation changes, the best Ten Hag can hope for is a loan signing.

However, on nights like this, it is not obvious that he actually needs reinforcements.

Injuries have limited Martial’s involvement this season but the Frenchman now has five goals to his name and is effective in the number nine role, even if he prefers to attack from wider positions.

And Ten Hag said before the game 25-year-old Rashford was capable of scoring 20 league goals.

Had substitute Alejandro Garnacho picked out the England man with a cut-back deep into the second half, Rashford would have doubled his tally for the night, which, as it is, takes him into double figures for the season in all competitions.

With Garnacho and Anthony Elanga making decent contributions off the bench, Ten Hag will need to look hard to find someone who is both good enough and within the club’s budget.

At the start of the month, former World Cup final referee Howard Webb took over the management of elite officials in England.

He has vowed to speed up the VAR process and try to iron out some of the issues still being experienced with it within the English game.

Yet, speaking to BBC Sport last week, Webb said incidents that involved multiple issues would always cause a problem and Forest were on the wrong end of one just before the break that took three minutes for Andy Madley and his colleagues at Stockley Park to solve.

Ryan Yates appeared to have headed in at the far post. However, there was a potential handball which needed to be checked. Once those replays had been studied, it became apparent Willy Boly had actually diverted the ball home.

As it turned out, Yates didn’t handle.

But Boly was offside and what would have been Forest’s first Premier League away goal since Brennan Johnson scored in a 1-1 draw at Everton was ruled out.