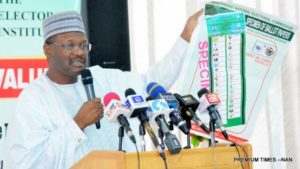 The All Progressives Congress (APC) Bauchi State Chapter alleged that the fact-finding Committee sent by the Independent National Electoral Commission to probe the irregularities in the governorship election of 9 March denied the party fair hearing.

Alhaji Uba Nana the state Chairman of the party made the allegation at a press conference in Bauchi on Saturday.

INEC announced on Friday night that a new returning officer will resume the collation of the Bauchi governorship election results on Tuesday. It also amended the result of four polling units in Ningi local government, from 25330 to 2533. The decision meant that the commission will announce the winner of the election thereafter.
“The fact-finding Committee chaired by Festus Okoye, the National Commissioner and Chairman of Information and Voter Education Committee denied fair hearing to APC as a political party whose agents were not invited during hearing of the facts leading to the cancellation of the Results of Tafawa Balewa LGA.

“Any decision taken in violation of fair hearing is illegal, null and void,” he said.

According to Nana, the composition of the Committee was also questionable as the Committee Chairman, Festus Okoye Esq, is a close ally and former solicitor to Hon. Yakubu Dogara of the Peoples’ Democratic Party (PDP).

Nana stressed that no justice can be done by the Committee Chairman who is interested in the whole issues and the instant circumstances.

He pointed out that this was proved by the fact that PDP and Yakubu Dogara on Facebook pre-empted the outcome of the Committee’s finding before formal publication by INEC.

The APC chairman said that the decision of INEC based on the Committee’s Report was already prayed for at the Federal High Court, Bauchi in Suit No. FHC/BAU/CS/18/2019 filed by Bala Mohammed and PDP against INEC.
“Unfortunately, the extant decision of INEC reversing the cancellation of Tafawa Balewa Results was earlier sought for but refused by the Court in the said suit at interim stage. Now INEC has granted what was refused by the Court of law in the interest of justice,” he said.

Nana said the party rejected in totality, the report of the fact-finding Committee on the disruption of collation process at Tafawa Balewa and the subsequent decision of the Independent National Electoral Commission (INEC) to reverse its earlier resolution cancelling the entire results of Tafawa Balewa LGA.

He said the position taken by INEC was illegal, null and void having regards to the Electoral Act 2010 (as amended) and INEC Guidelines for 2019 General Elections.(NAN)