INEC Has Power to Postpone Elections at Its Own Discretion – Tinubu 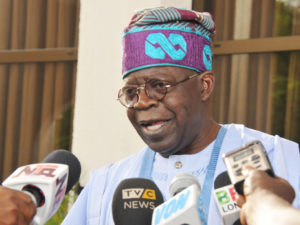 Unlike President Muhammadu Buhari and the National Chairman of the All Progressives Congress (APC), Adams Oshiomohole, who had vehemently condemned the postponement of 2019 elections, the National Leader of the APC, Senator Bola Tinubu, Monday in Abuja said the electoral commission reserved the right to postpone or cancel polls using its discretion.

Tinubu who made this declaration while answering questions from journalists in the Presidential Villa after the caucus meeting of the party, insinuated that INEC had done nothing unusual having been empowered to postpone or cancel elections, provided the intention was to guarantee free and fair elections.

According to him, no matter the degree of anger and disappointment expressed over the postponement, the decision remains irreversible, adding that APC is prepared for the February 23 rescheduled presidential election.

“It depends on how it is handled and the process, how the process is managed; you can convert crisis, a situation of adversity, to an opportunity and progress.
“The INEC, under the law, they are empowered to postpone, cancel and do whatever is necessary to ensure free and fair election. No party, other than the anger, the disappointment, no party can reverse that. So, we are ready for Feb. 23,” he said.

He said: “By law, we should continue to energise our people. It depends on our resources because the Electoral Act allows us to do that led us to stop campaigning only 24 hours before the actual election. And once you changed the date to Feb. 23, you have given us the opening to campaign and energise.
“If you have a garden and you don’t nourish it with water, the grass will remain dormant. We don’t want our party to remain dormant. This is the ability of leadership to convert adversity to opportunity and prosperity and that’s it. That’s what we must do.”

Tinubu also rose in defence of the order given by Buhari to security operatives to be ruthless with political thugs and ballot box snatchers during the elections, describing the president as a law abiding citizen.

Buhari had at the national caucus’ meeting of the APC at the party secretariat Monday, said he had ordered the security agents to deal ruthlessly with anyone who attempts to undermine the integrity of the polls even at the risk of the person’s life.

He said: “I was in that meeting; the president was just reinforcing the fact that if you are out there, snatching ballot boxes, and causing disruptions, you are at the risk of your own life, whatever happens to you; no president will give an order that his own citizens should be shot summarily. No, No. It’s okay. Emotions are running high these days. Any individual including myself can be misinterpreted.

“These are not his words. He is a law abiding person and he understands categorically and clearly what rule of law is and the lives of individual citizens that he is in that office to protect. Now, let me say this; he has been fighting Boko Haram, kidnappers and all these before this election, did you hear him asking them to be shot and executed summarily? If he has gone through that in the last four years, please give him a benefit of doubt.,” Tinubu added.