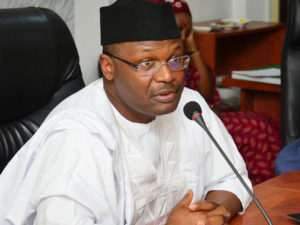 As the campaign for the presidential and National Assembly election kicks off, the Independent National Electoral Commission (INEC) has warned against any contravention of the Electoral Act and its election regulations, vowing to strictly monitor campaigns by political parties.

The Chairman of INEC, Prof. Mahmood Yakubu, disclosed this Wednesday during a meeting with Resident Electoral Commissioners (RECs) at the commission’s headquarters in Abuja.
He told them that the campaign for the 2019 presidential election officially commenced on Sunday, November 18, 2018 as provided for by the Electoral Act, in line with the commission’s timetable and schedules of activities, urging them to ensure strict compliance with the extant rules guiding the election.

“The commission is committed to closely monitor the campaigns pursuant to our statutory mandate and to ensure compliance with the extant laws and regulations,” he said.

Continuing Yakubu said, “We are pleased that the focus in the last few days, since the commencement of the campaigns has been on policies rather than personalities. We sincerely hope it remains this way.”
Multiple sections of the electoral law regulate the conduct of campaign by political parties and politicians, who are enjoined to keep the polity safe from injurious statements.

Specifically, Section 95 of the Electoral Act (2010) prohibits certain conduct at political campaigns, with subsection (1) saying that “no political campaign or slogan shall be tainted with abusive language directly or indirectly likely to injure religious, ethnic, tribal or sectional feelings.’’

Subsection 2 of the section is more emphatic, “Abusive intemperate, slanderous or base language or insinuations or innuendoes, designed or likely to provoke violent reactions or emotions shall not be employed or used in political campaigns,” while subsection (3) says, “Places designated for religious worship, police station, and public offices shall not be used for political campaigns, rallies and processions; or to promote, propagate or attack political parties, candidates or their programmes or ideologies.”

The law also prohibits the abuse of culture for political purposes.
For instance, Section 95 (4) says, “Masquerades shall not be employed or used by any political party, candidate or person during political campaigns or for any other political purpose,” while Subsection (5) says, “No political party or member of a political party shall retain, organise, train or equip any person or group of persons for the purpose of enabling them to be employed for the use or display of physical force or coercion in promoting any political objective or interest or in such manner as to arouse reasonable apprehension that they are organised, trained or equipped for that purpose.”

Subsection (6) also says, “No political party, person or candidate shall keep or use private security organisation, vanguard or any other group or individual by whatever name called for the purpose of providing security assisting or aiding the political party or candidate in whatever manner during campaigns, rallies, processions or elections.”
On the consequences of the breach of the Act, Subsection 7 stipulates penalties for infringement as N1million or 12 months imprisonment for individuals and N2million in the first instance and N1million for subsequent offence for a political party; while subsection (8) says aiding and abetting of contravention of subsection (5) by any person shall warrant N500,000 fine or three years imprisonment or both.

At the meeting with the top INEC officials wednesday, Professor Yakubu stressed that the last meeting held with the RECs, two months ago focused on the preparations for the 2019 general elections, especially on the conclusion of the Continuous Voter Registration (CVR) exercise.

He noted that the commission had been working on the clean-up of the voters’ register, describing it as the foundation for the conduct of credible elections.

He explained that the recently displayed voters’ register in all polling units nationwide was for claims and objections, and ensuring that citizens help the commission to identify any ineligible registrants, such as persons below statutory age of 18 years and non-Nigerians, who may have registered as well as deceased persons and multiple registrants.
He said wednesday’s meeting enabled the RECs report on the outcome of the exercise in their various state, adding that the reports would be shared with the general public.”

The chairman said the meeting would dwell on the progress made on the collection of outstanding Permanent Voters Cards (PVCs) by citizens as well as new modalities for a more efficient administration of the collection process.
He added that the meeting would consider the recruitment and training of election duty staff, discuss the ongoing review of the framework for voting by Internally Displaced (IDPs), explore additional administrative measures in support of Persons with Disabilities (PWDs) in the electoral process.

“We will also examine additional ways to safeguard the sanctity of the ballot against the menace of vote-buying at polling units, appraise issues relating to electoral logistics and generally and generally access facilities and preparations for the general elections,” the chairman added.

The chairman, however, regretted the loss of four of the commission’s staff members in Kogi State and one in Edo State, adding that it would work with security agencies to ensure the arrest and the prosecution of those involved in the attack and vandalisation of electoral materials at a polling unit in Kwara State.