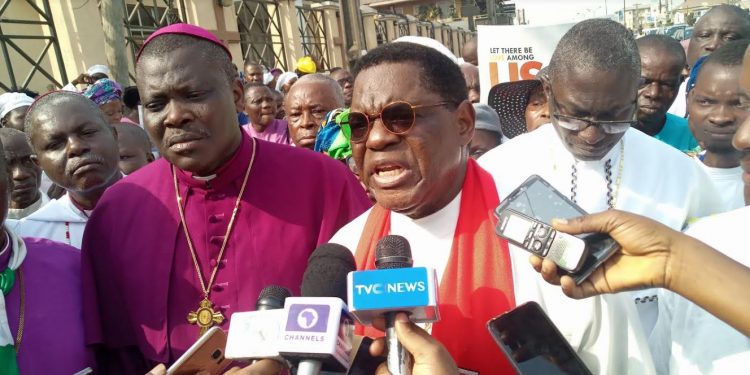 Lagos branch of the Christian Association of Nigeria (CAN) has now joined her national body to demand an end to the spate of insecurity and killings across the states of the country.

Following the recent killings of her members by the insurgent group of Boko Haram, the association headed by Reverend (Dr.) Olasupo Samson Ayokunle had declared a nationwide prayer rallies from Friday, 31st January, 2020 to Sunday, 2nd February, 2020, insisting that President Muhammadu Buhari should deploy every security apparatus to protect citizens.

During the demonstration in Lagos on Sunday, the branch chairman, Apostle (Prof.) Alexander Bamgbola challenged the government to restore Nigeria’s reputation as a strong, secured and prosperous nation within the African continent.

According to him: ‘Nigeria has one of the best Armies in the world. Past generations can testify that here is a great nation where prosperity and the peace of God used to reign. We have done it before in Congo and South Africa, so our government has no excuse but to fight insurgence to a standstill. Today, we are making a point to our leaders to rule the nation for God and stop these killings.’

‘The church has kept quiet for so long but we cannot continue to watch while our people are being butchered like animals. Investors are running away and countries of the world are shutting their borders on us because of the evil in the land. We need peace for prosperity to reign!’, he firmly expressed.

‘Whether they invite us to their national fora or not, we will continue to be on their neck. Enough is enough to the insecurity here and there. Never will Nigeria remain an abandoned project’,

Similarly, the General Overseer of the Redeemed Christian Church of God (RCCG) Pastor Enoch Adeboye led the members of his church on a protest march today for same reason from Ebute Meta to Atan Cemetery in Yaba metropolis and back.