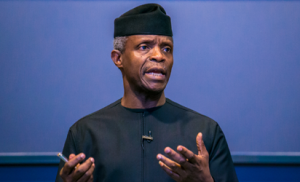 Osinbajo, who stated this at the 7th Presidential Quarterly Business Forum for private sector stakeholders at the Conference Centre, Old Banquet Hall, Presidential Villa, Abuja, also noted that corruption had not been completely dealt with by Presient Muhammadu Buhari’s administration.

Describing corruption as a cankerworm that had become systemic in the country, he said:  “I do not think that any consideration about our economic development can be properly and honestly done without fully analyzing corruption, especially grand corruption, in the public finance space. “You see that despite record high levels of oil prices, very little was invested in infrastructure and a record level of leakages was recorded in the past few years.

This is the fundamental issue in our economy. ‘’Corruption affects everything. It affects even judgement as to what sort of infrastructure to put in place or whether infrastructure will ever be complete. It is so fundamental that we can’t even think of our economy without thinking of what to do about it. “Sometimes when we talk about our economy, we talk about the fact that we have relied on single commodity and that is one of the reasons we are where we are. Yes, that’s quite true but the fact is that proceeds from that single commodity were regularly hijacked consistently by a few. ‘’That is really the problem.

If we had spent the proceeds from that single commodity the way we ought to, we won’t be where we are today.  Most of the proceeds went to rent seekers in the industry and production. “For example, I am sure many of us are familiar with the so-called Strategic Alliance Contract with the NNPC and NDDC.

The promoters of the companies made away with close to $3 billion, almost a tenth of our reserves. ‘’There is no way, if someone made away with a tenth of your reserves, that you will not have a major economic shock. And if we don’t deal with it, if we don’t talk about it, how will we be able to discuss our economy in a real honest way, with a view to ensuring that these things do not happen again? “In one single transaction, a few weeks to the 2015 elections, sums of a $100,289 million were just frittered away by a few.

When you consider that in 2014, as the Minister of Finance has said, that oil price was an average of $110 a barrel and only N99 billion was spent on power, works and housing and when we talk about the economy, we talk as if these are normal by every standard. “Nobody should talk about the economy when you have this kind of huge leakages and huge corruption, corruption that completely makes nonsense of even what you are allocating to capital projects. He further stated that when the government was committed in fighting corruption because of the systematic problem, corruption always fought back.

Osinbajo said:  “I am not saying that corruption under this administration has been completely dealt with, no, certainly not. Where corruption has become systematic such as we have in our country today, you cannot deal with it in one fell swoop; it is not possible. “In any event, you still have a lot of corruption fighting back. The system fights back and its both an internal and external fight back and you have to be steadfast and strategic to win the battle.

“There is no way that you have a system such as ours that has consistently thrived on corruption and proceeds of corruption and public financing in particular, that will give up and say guys, the problem has been solved. No. “It is a system that feeds on corruption and it affects all aspects of governance, so trying to deal with it is certainly not a walk in the pack.

“But I want to say that that task has already begun and that task is being done consistently and I believe that going forward in the next few years, no matter how we are criticized, if we stick to policy, especially controlling excesses and corruption in public finance, this country will make the kind of progress that it deserves to make with all the resources at our disposal.’’

Speaking at the meeting, the organized private sector, OPS, called on the Federal Government to rehabilitate ports in the eastern flank of the country, such as Warri, Port Harcourt, Onitsha and Calabar, in order to boost the economy. It added that most of the importers were from the area where the ports had been abandoned and made dormant. OPS said if the eastern seaports were opened, it would be easier for them to clear their goods.