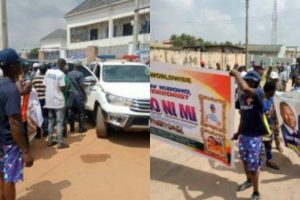 Some Supporters of Yoruba Nation agitator, Sunday Adeyemo, popularly known as Sunday Igboho, on Saturday in Ibadan, took to streets and staged a protest, calling for his unconditional release from custody.

Recall that Sunday Igboho is currently in detention in Benin Republic over issue bothering on illegal migration, among other offences.

The protesters, who were mostly youths, carried placards with various inscriptions, demanding the immediate release of the activist currently in custody of the Republic of Benin.

They started the protest from the residence of Igboho situated at Soka area of Ibadan and matched toward the Toll Gate on Ibadan – Lagos Expressway.

The News Agency of Nigeria (NAN) reports that the protesting youths were singing solidarity songs, calling on the Federal Government to facilitate the release of Igboho from the custody of Republic of Benin.

@@dailyrecordng
Previous GTBank Tops List Of Banks Who Defraud Their Customers As They Protest The Fraudulent Deductions & Hacking Of Their Accounts.
Next BREAKING: SERAP Drags Buhari To UN Over Raid On Justice Odili’s Home