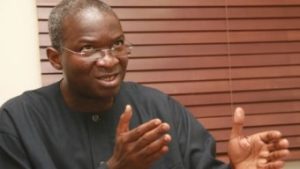 The Minister of Power, Works and Housing, Mr Babatunde Fashola, has urged the Federal High Court in Lagos to dismiss a suit filed by human rights lawyer, Mr Femi Falana (SAN), seeking to compel the Federal Government to fix the Oshodi-Apapa Expressway and end the intractable gridlock on the road.

In the suit, Falana urged the court to declare that the packing of tankers and trailers on the overhead bridges in Lagos was illegal and constituted a threat to citizens’ fundamental right to life.

He urged the court to declare that the Federal Government’s failure to remove obstructions, repair and maintain the Oshodi-Apapa Expressway was a violation of Section 33 of the constitution, which guarantees citizens’ right of life.

He argued that the failure also violated Article 4 of the African Charter on Human and Peoples’ Rights (Ratification and Enforcement) Act (CAP A9) Laws of the Federation of Nigeria, 2004.

The lawyer urged the court to order the Federal Government “to remove all obstructions, repair and maintain the Oshodi-Apapa Expressway forthwith.”

But according to a statement on Wednesday by PAF Secretary,Eze Alloysius, the Minister of Power, Works and Housing has filed a preliminary objection, challenging Falana’s locus standi to file the suit and urging the court to dismiss it.

According to the statement, a litigation clerk in the Ministry of Works,  Ayodele Otedola, deposed to a counter-affidavit on behalf of Fashola, contending that “the failure to repair the road has not, in any way, restricted or breached Mr Falana’s freedom of movement”.

Hearing in the suit has been fixed for January 19, 2019, according to the statement.