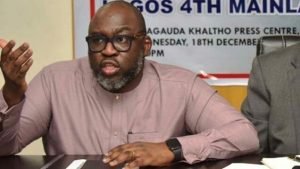 He said the PPP office is working tirelessly by ensuring that the state government leverages public-private sector synergy to bridge infrastructure gap in critical sectors such as transportation, health, traffic management, and housing development.

Speaking during a media interview, George admitted that there was infrastructure gap in Lagos State like in most states of the federation, but stated that the administration of Governor Babajide Sanwo-Olu was committed to bridging this gap by taking advantage of people-friendly PPP model to deliver projects that impact Lagosians positively.

He stated that the state government is delivering infrastructure that are visible and such that people can get immediate value for them.

The Director-General further stated the resolve of the state government to shorten the delivery time-frame of projects and policies that affect the people directly; while being creative, innovative and ensuring diversification in delivering people-friendly PPPs to the good people of Lagos State.

Mr. George cited Awa Bike, a bike-share scheme in partnership with Awa Bike Limited, as one of the numerous PPP initiatives. ‘‘This non-motorised transport initiative is in tandem with the resolve of the Lagos State Government to tackle traffic congestion in the state. Rapid urbanisation is a major challenge in most cities across the world; so, the vision of this government is to make commuting in and around the megacity less stressful and to bring down the cost of transportation. Another benefit of Awa Bike is that it promotes good health and environment friendly. It is also very affordable,’’ he said.

He also said the ultra-modern Medical Park, which the state government is constructing in Ikoyi, as a centre of medical excellence with state-of-the-art equipment and infrastructure, as well as the Maternal and Child Care Centres in Ajah, Eti Osa and Alimoso, equipped with modern facilities using the people-friendly PPP model, were also among the impact projects embarked on by the government.

In the aspect of transportation, Mr. George stated that through the partnership with Artezia, a technology company with specialty in traffic management system, the state government has strengthened enforcement of responsible driving with the deployment of technology devices that capture processes and stores traffic violation data as well as billing payment for vehicle inspection solution for traffic offenders.

He added that the construction of units of houses at Ilubirin Housing Estate and student hostels at the Lagos State University (LASU) were also some of the quick-wins, people- friendly projects that the state government was undertaking for the betterment of the lives of residents of the state.