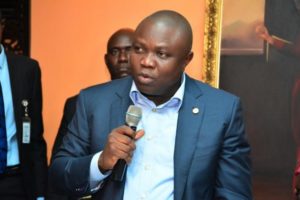 The Lagos State Government has disclosed that the ongoing Oshodi Transport Interchange being executed to evolve a seamless way by which Lagos residents commute across the state daily will be completed within the first quarter of 2019.

Consequently, the state disclosed that the project, which the administration of Governor Akinwunmi Ambode pioneered early 2017, was already 83 per cent completed at the end of October.

The Commissioner for Works and Infrastructure, Mr Adebowale Akinsanya, gave the update in a statement he issued Monday, noting that substantial progress had been made towards its completion.

With the ongoing pace of work, Akinsanya said the project would be completed by the first quarter of 2019 and operations would take off immediately, saying commuters around the state should look forward to having a comfortable, accessible and world-class transport system.
Akinsanya commended motorists and residents for cooperating with the state government during the project implementation, assuring them that all hands are on deck to expedite work and complete it on schedule.

Among others, Akinsanya said the construction firm, Planet Project Limited “has also completed works on the pile caps for the three terminals, concrete works of the buildings, ground floor works on all the loading bays for the three terminals, erection of steelworks for the Skywalks and terminals and taxi park and car park area”.
Also, the commissioner noted that all road construction works around the Oshodi transport exchange “are at an advanced stage as well as bus holding bays around the terminals also at an advanced stage”.

Akinsanya added that The Oshodi Transport Interchange Project, which is part of the Bus Reform Initiative (BRI) initiated to end the state’s gnawing traffic congestion, “is an iconic infrastructure designed to transform the axis forever and enhance connectivity”.

“The project, in a nutshell, seeks to transform Oshodi into a world-class Central Business District (CBD) with business, travel and leisure activities conducted in a serene, secure, clean, orderly and hygienic environment, comparable with other transport terminals around the world including Stratford and Victoria Bus Station in the United Kingdom.