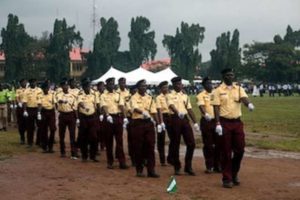 The Lagos State Traffic Management Authority (LASTMA) has charged motorists to be cautious on the roads to avert emergencies during the last quarter of the year.

The Deputy General Manager of LASTMA, Mr. Isaac Adetimiro, gave the charge while addressing top management staffers of the authority.

Adetimiro’s charge was contained in a statement issued by Mr. Olumide Filade, the Assistant Director, Public Affairs of the Authority on Friday, in Lagos.

He called on motorists and commuters to be cautious in order to avoid accidents that could lead to loss of lives and properties usually associated with the last quarter of the year, popularly called ‘ember months’.

“It is pertinent to urge the motoring public to be cautious and careful on the road as so many people ignorantly attach myths to the ’ember’ months, thereby raising a needless alarm and causing anxiety.

“This narrative can be averted if we all obey and adhere strictly to traffic laws and ensure that our vehicles are well maintained,” he said. Adetimiro also advised traders not to sell their wares on the roads, while urging buyers to maintain the law by refusing to buy on the road so as to discourage the traders.

The Deputy General Manager of LASTMA urged motorists to check the condition of their vehicles and ensure that their vehicle documents were up to date before embarking on any journey in order not to fall victim of the law.

According to him, ignorance of the law is no excuse in law, as driving against traffic otherwise known as ‘one-way traffic’, failure to use seat belt and disobedience to traffic light indicators, among others, should be avoided for safety and sanity on the road.

“All motorists, especially commercial vehicle operators, are advised to shun all forms of reckless driving, unruly behaviour and any other form of disorderliness on the road as we begin these ‘ember months”. “Violation of traffic laws will attract penalties when convicted by the court and penalties range from fines to forfeiture of vehicles and imprisonment in the case of assault on LASTMA officials. “Commercial motorcyclists and tricycle operators are also not left out in this campaign for safety and sanity on Lagos roads.

“We cannot wish away the fact that the growing population of Lagos residents on a daily basis is one of the reasons we are faced with traffic challenges.

“While this reality humbles us, our officials have been trained on civility, politeness, and protocol of arrest with emphasis on respect for members of the public who violate traffic rules and regulations,” he said.

On the ongoing reconstruction of the Berger-Kara Cattle Market portion of the Lagos-Ibadan Expressway which has resulted in a partial closure of the highway, the LASTMA chief called for patience on the part of the motorists.