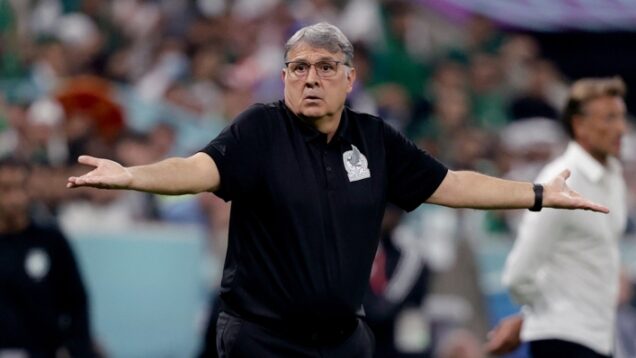 Tata Martino accepted responsibility for Mexico’s “huge failure” at the World Cup and confirmed his contract had now expired with little prospect of him returning to the role.

Martino has been a largely unpopular El Tri coach, and his standing was not helped by Wednesday’s elimination in the group stage at Qatar 2022.

Mexico came agonizingly close to making the last 16 at an eighth straight World Cup before they were instead knocked out on goal difference behind Poland in Group C.

After second-half goals from Henry Martin and Luis Chavez against Saudi Arabia at Lusail Stadium, Mexico were tied with Poland on points, goal difference and goals scored, having drawn their head-to-head encounter.

With the full-time whistle having blown in Poland’s match against Argentina, Mexico were heading out due to an inferior fair play record when Salem Al Dawsari pulled one back for Saudi Arabia in stoppage time.

Ultimately, Martino’s men had left it too late to stage a recovery, and plenty of the ire was directed at the coach, whose name had been jeered ahead of kick-off.

Told of his status as a “villain” in Mexico, Martino replied: “I can’t tell you anything about people’s opinions.

“I am the main [person] responsible for the frustrations we have. I’m responsible and it’s a source of great sadness.

“I assume all the responsibility for this huge failure. It’s been eight World Cups this hasn’t happened.”

Martino’s contract was to expire after the World Cup, and he continued: “I have no reasons at the moment to think the future should be different. The contract expired with the final whistle and there is nothing else to do.”

Chavez was asked for his opinion later in the news conference and added: “We are the players, we assume full responsibility.

“I would say in the second match [against Argentina] we didn’t fully understand what he [Martino] wanted to see on the pitch.

“We defended well for some time but didn’t create enough chances.”

Meanwhile, Saudi Arabia coach Herve Renard accepted his side did not deserve to advance with their performance against Mexico.

However, he sought instead to focus on their campaign as a whole – including the shock opening win over Argentina.

“Congratulations to the players. We did our best,” he said.

“Today it was more difficult for us, but we don’t have to forget what we did together. I will always protect them. I’m proud of their World Cup.”