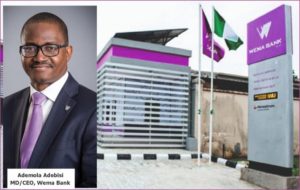 For one of the oldest financial institution in the Nigeria’s banking industry, it has become a case of one trouble to many for Wema Bank Plc as the bank continues to swim in the sea of controversies amidst financial improprieties, funds are being diversion.

And as it stands, the bank is fast proving to be L’Enfant terrible in the Nigeria banking sector, as its name constantly props up in every underhand dealing featuring some Nigerian financial institutions.

Unless something drastic happens to salvage the situation, Wema Bank may run into serious financial crises that may render it unable to meet its obligations.

Issues are beginning to emerge rapidly on how top bankers launder money in customers account without their consent.

Many bank officials today are getting involved in what is not expected of them and this most times caused by greed and lack of contentment.

Many so called bank MD’s and top management staffs have been enmeshed in several controversial issues that left the jaws dropping. Some of them throw caution into the air and blatantly wave aside their positions in the society to perpetrate heinous crimes not expected of men of the class and calibre. That is why one of the cases on ground presently with the Economic and Financial Crimes Commission (EFCC) is worth publishing for public consumption.

In recent past, many monetary atrocities have been reported by different media organizations involving top banking executives and their cohorts who engage in illegal fiscal activities to the detriment of their customers and other stakeholders of the country’s financial sector.

This is the unexpected tale of Ademola Adebise, the Managing Director of Wema Bank Plc who connived with some top management staff of the old generation bank to unleash impropriety, in the ways and manner they allegedly laundered over a whopping N1billion (One Billion Naira) into the account of an innocent and unsuspecting customer of the bank that could not even boast of a sum of N300,000.00 (Three Hundred Thousand Naira) without an alert.

This money laundering scam was part of the conspiracy scheme to dispossess the owners of a prestigious and popular hospitality and entertainment facility located in Maryland which is currently under the receivership of Kunle Ogunba (SAN) and subject of litigation. It is however surprising that people could still have enough boldness and confidence to be involved in this alleged huge crime despite the very hard approach of the government’s fight against corruption.

This is why it is common today to witness situations whereby unsuspecting bank customers whose accounts are not very buoyant and active suddenly realize whopping amounts of money in their custody. This is part of the moves taken by these avaricious and highly covetous bankers who hide under the guise of corporate stakeholders to commit stringent financial crimes.

How on earth would a man who hardly could deposit N300,000.00 in his account suddenly be credited a sum of 1Billion Naira without an alert or any form of notice.

The EFCC, immediately on smelling rat in this issue, summoned the bank MD, Kunle Ogunba (SAN) and other conspirators, to their Ikoyi office where the account owner vehemently denied any knowledge of the transaction, and lamented the state of decay in the Nigerian banking sector.

This prompted the anti-graft agency to detain both Ademola Adebise the MD of Wema Bank Plc and other top management staff, suspecting that they played a very huge role in the illegal financial transaction in a ploy to oust the owners of the 4 star Hospitality and Entertainment facility, with a bid to acquiring it for themselves through one of the conspirators.

Unfortunately, their fraudulent game and gimmick was exposed. We gathered that very soon, the MD of WEMA Bank and other co-conspirators, would be made to face the court of law and get arraigned, prosecuted and if found guilty, will definitely end up in jail. We shall be updating our esteemed readers on this issue as it unfolds.