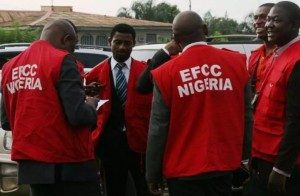 A Nigeria pastor, resident in South Africa, Obinna Ikenna Ezenwanne, has petitioned the Economic and Financial Crimes Commission, EFCC, over an alleged illegal harassment, intimidation and confiscation of his black Range Rover (Sports Utility Vehicle) by some operatives of the Commission.

This is even as the EFCC boss, Ibrahim Magu has immediately ordered investigations into the issue.

In the petition letter, obtained by our correspondent, the petitioner alleged that some operatives of the EFCC, led by one Mrs Deborah Oni had collaborated with one Mr Marcus to confiscate his SUV at his Onitsha resident.

Part of the letter read that: “sometime in August, 2014, Pastor Obinna, who was visiting Nigeria for a pastoral assignment approached his regular auto dealer, SOJ Autos, with office at No: 39 Marina road, First Badagry bustop, Liverpool, Apapa, Lagos for the purchase of a land Rover Range Rover at the rate of N12 million and all necessary receipts and particulars were issued.

“However, when Mr Soji, the managing director of SOJ Autos brought the Land Rover jeep to the Lagos airport for inspection, Pastor Obinna on his arrival discovered that the vehicle had a warning light on which could mean that the vehicle was having some mechanical faults, the land rover was rejected.

“Two months letter, Mr Soji called pastor Obinna that he had another Range Rover SUV black in colour to replace the one pastor Obinna rejected. The vehicle was found to be in good condition and on December, 16 2014, Mr Soji arranged for his personal assistant who was simply known as MC to assist pastor Obinna to drive the vehicle to Onitsha, where it would be in use after the registration formalities. MC was paid $400 and N30, 000. 00 for his services.

“The vehicles was registered as JJJ741 and has been in use since then anytime pastor Obinna visited Nigeria.”

The petitioner, however, alleged that some operatives of the EFCC led by Mrs Oni with the Special Anti Robbery Squad, (SARS) invaded Onitsha, where the vehicle was and arrested pastor Obinna’s younger brother, ThankGod, who was keeping the vehicle on the ground  that Mr. Soji didn’t remit the money to one Mr. Marcus, who is said to be the original owner of the vehicle. This is coming after two years of the Vehicle being in use.