N322m Fraud: Nwoboshi Urges Court To Stop Bank’s Official From Testifying Against Him 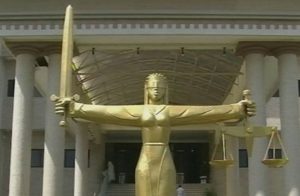 The trial of the embattled Senator Peter Nwoboshi, senator representing Delta North Senatorial district, was stalled Thursday, as his lawyers urged the court to stop an official of Zenith Bank Plc, from testifying in the trial.

Nwoboshi alongside his two companies;  Golden Touch Construction Projects Limited and Suiming Electricals are being tried before a Federal High Court, Lagos, by the Economic and Financial Crimes Commission (EFCC).
They were accuses of laundering the sum of N322 million.They were re-arraigned before Justice Chukwujekwu Aneke on October 5, following the elevation of the former trial judge, Justice Mohammed Idris, to the Court of Appeal.

The Senator had pleaded not guilty  before Justice Idris and Aneke.

At the resumed trial of the Senator and his companies, the prosecution led by A. O. R. Ogunde (SAN), had called its third witness, Eyituoyo Nogbeyintere, an official of the Zenith Bank Plc.

But lawyers to Senator led by Chief Nwechue (SAN), C. K. Nmagwu and Onyebuchi, raised objections to the Zenith Bank Plc’s official testifying against their clients on the ground that his name was not listed as one of the witnesses and that his statement was not front loaded in the proof-of-evidence.
Nwoboshi’e lawyers told the court that allowing the witness to testify in the trial would amount to ambush and denied their clients of their fundamental rights.
They argued that the golden rule is that the prosecution must give the defendant both the opportunity and materials which includes the statement (s) of the proposed witness it intend to call, in any trial, so that the defendants can adequately prepare themselves on the evidence of the witness.
They therefore urged the court to disallow the Zenith Bank official from testifying in the trial of their client,
Responding, the prosecutor, Mr. Ogunde (SAN), said the witness is a representative of Zenith Bank and that Zenith Bank was listed as one of those that will testify in the matter. Adding that the witness is to give evidence on behalf of the bank.
He told the court that since there is any request from the defendants for the name and the statement of the witness, they cannot claim that their rights have been breached.
The prosecutor urged the court to hold that there is no any statutory law compelling the court not to allow any witness who did not write any statement cannot testify or give evidence in any trial. And that the witness he called is only to tender documents on behalf of Zenith Bank that he represented
Ogunde (SAN) therefore urged the court to allow the Zenith Bank official to testify in the matter.
following the arguments of the parties, the presiding judge, Justice Aneke, adjourned the matter till March 19, for ruling and continuation of the Senator’s trial.
The EFCC alleged that Nwaoboshi and Golden Touch Construction Projects purchased a 12-storey building  known as Guinea House on Marine Road in Apapa, Lagos, for N805 million in May and June 2014.The anti-graft agency claimed that N322 million out of the N805 million was part of proceeds of fraud.

The agency also alleged that the N322 million was transferred to the property’s vendor on the order of Suiming Electricals, which was accused of aiding  to commit the money laundering.

The alleged offences according to the EFCC are contrary to the provisions of Sections 15(2)(d) and 18(a) of the Money Laundering (Prohibition) Act, 2011.
Share

@@dailyrecordng
Previous B/Haram: I will probe Buratai, others If elected – Atiku Abubakar
Next APC to Atiku: Nigerians will never return to Egypt