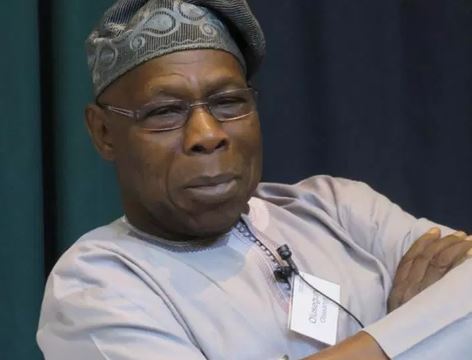 The agitation for a new political order and arrangement in Nigeria got a new convert in former President Olusegun Obasanjo on Saturday.

He canvassed a new constitution for the country as against an amended one.

He also hailed the Southwest governors for what he called their courage in establishing the Western Nigeria Security Network (WNSN) Operation Amotekun to check insecurity in the region.

Obasanjo who spoke at the first Annual Frederick Fasehun Memorial Lecture in Lagos said “nothing has united the people of the Southwest like Amotekun since Nigeria’s Independence in 1960.”

He stressed that a new political order and arrangement would strengthen Nigeria’s unity and make room for healthy and useful competition among its component parts.

It has become imperative for the executive and the legislature arms of government, he said, to work together to establish a Constituent Assembly charged with the responsibility of fashioning a new constitution for the country.

Obasanjo recalled how Nigerians’ disenchantment with the current political structure started with the quest for “true federalism” during his tenure.

The refrain, he said, has since changed to “restructuring”.

He feared that the next phase could turn out to be call for self-determination by one or more geo-political zones, which will not be easy to suppress.

He said he was one of those who underestimated the Biafran rebellion, saying it would not last three to six months, only to stretch to 30 months.

“If after more 10 years of fighting Boko Haram, the terrorist group is still waxing strong, let nobody out of self-delusion think that a war of self-determination by one or more geopolitical zones of Nigeria with the present disenchantment would be easily suppressed by the rest of what may remain of the country,” he said.

He said most of the assumptions in the 1999 Constitution (as amended) “have been found to be unrealistic and unrealisable in practice by any administration that wishes to put them in the rubbish bin.”

He added: “This is the situation today. Let us put our experiences to work and fashion out a political order and arrangement that will strengthen our togetherness while making room for healthy and useful competition within the one entity, Nigeria.”

The former president who spoke under the theme, “Working the Talk Yesterday, Today & Tomorrow”, said Nigeria does not need to go the way of  the former Yugoslavia, Sudan or Rwanda and Somalia.

His words: “None of these countries knew the avoidable and divisive end from the beginning.

“Let us learn from the experience of others and of our founding fathers who resolved their political differences through dialogue and debate without resorting to violence and separation but accommodation, telling themselves hard truth, tolerance and give-and-take spirit.

“That was the foundation of Nigeria at independence and let it continue to be.  If all we are interested in is power and not holding the country together harmoniously and wholesomely, we may hold the mirage of power and lose the nation or the country bequeathed to us by our founding fathers.”

He said: “But the Nigerian Constitution does not give the National Assembly the power to write a new Constitution but the power to amend the existing one.  What is required is a new constitution to meet the agitation and aspiration of all Nigerians and to allay all fears.

“The executive and the legislature need to work together to establish a Constituent Assembly. The exercise must not be compromised like the present Constitution; it must have full legitimacy of ‘We the people’.”

He said he would continue to fight for ‘one Nigeria’. Nevertheless, he said he is not prepared to be a second class citizen for the sake of ‘one Nigeria’ and that he would wish the same for his children.

The former president commended the governors of the Southwest region for putting aside their political differences for the sake of the security and wellbeing of their people. He said the current national security architecture has failed and that is why state governors have resorted to various measures, including “paying off bandits, hunting them down with vigilantes and hunters and to innovative joint efforts like Amotekun.

“Whatever we may feel individually or collectively by these different measures, these governors must be commended and where necessary, they should be helped to refine and make robust and efficient the effective measures they have taken, from Katsina to Zamfara, from Adamawa to Benue and from Southeast to Southwest.

“From my personal observation as I talked to people and people across the board talked to me, nothing has united the people of Southwest like Amotekun since independence except independence itself. Not even the civil war was such a unifier.

“I commend the governors of Southwest for their bold and courageous measure taken beyond political party affiliation to improve security architecture and care for their citizens. Security measures are never static and security is the responsibility of all of us but by appointment and elections, some have more responsibility than others.”

The first Annual Frederick Fasehun Memorial Lecture was to celebrate the 25th anniversary of the OPC and one year memorial of Fasehun, who passed away on December 1, 2018. Obasanjo eulogised the late Fasehun, who was the founder of the Oodua Peoples Congress (OPC), saying if he were alive today, he would have been seriously concerned about the deteriorating security situation and the political structure.

He described the late OPC founder as a true and committed Nigeria who stood out as a beacon of hope for the less-privileged. “Though he was learned and well-travelled, he thought nothing of freely associating himself with artisans and people who were beneath his social status,” he added.

Obasanjo said ironically the late Fasehun’s role as the founder of the OPC has overshadowed his antecedents as a medical doctor. He said: “Undoubtedly, he wanted to be free of the bureaucracy that attends the running of public institutions in Nigeria. Instead of remaining in LUTH to bid his time and warm the chair, he resigned honourably. This led to his quitting LUTH to set up Isi-Hope Clinic in 1978 which later became Besthope Hospital. The hospital flourished and grew in popularity. Among the clients was the Dock Workers Union of the Nigeria Labour Congress, NLC.

“His medical prowess included reviving the kidneys of a lady (among several others) whom other doctors had billed for dialysis to be followed by a possible transplant. It took about 10 days at Fasehun’s Besthope Hospital, Mushin area of Lagos, and the kidneys returned to life. That was in 2004. Shall we speak of women who had their infertility status reversed and came to know the joy of motherhood at Fasehun’s Besthope Hospital? His private hospital became a reference point for best practices in modern Chinese medicine in Africa.”

Obasanjo said he agreed to attend the event because the OPC President, Aare Prince Osibote, told him that his group is the reformed faction that is espousing the ideals of the late Fasehun.