Nigeria Voted For Change In 2015.. But Got Poverty, Insecurity – Atiku 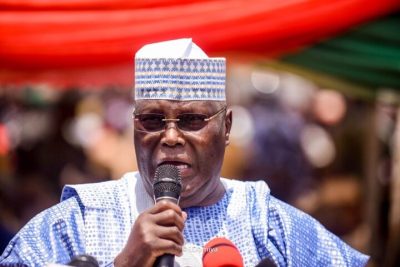 Atiku Abubakar, presidential candidate of the Peoples Democratic Party (PDP), says he will tackle poverty and insecurity if elected in the 2023 general election.

The former vice-president spoke on Monday at the of the PDP presidential campaign in Uyo, the capital of Akwa Ibom.

Abubakar, said when PDP was in power, it “lifted Nigeria from the bottom to the top” and made the country the biggest in economic terms in Africa.

He said the All Progressives Congress (APC) has failed to live up to its campaign promises of making the country better than it took over from the PDP.

“Nigeria said they wanted change, and they voted for change in 2015. What have we seen? What we have seen is poverty, insecurity, lack of jobs and disunity,” he said.

“Our children are no longer going to school. Is that what we want to continue with?

“Today, we have flagged off our campaign to rescue Nigeria from hunger, and poverty and to bring back the unity that we require in this country. Therefore, I want to appeal to all Nigerians by standing today in Uyo, Akwa Ibom state, to ask them to vote for PDP.

Speaking on the lingering strike by the Academic Staff Union of Universities (ASUU), Abubakar said: “I swear, if you vote for PDP, you’ll all go back to schools; you will get jobs; there will be security; and there will be unity.” (The Cable)