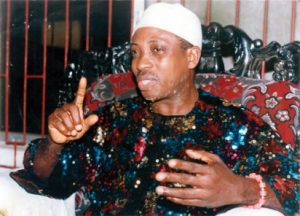 LEADER of Biafra Independence Movement, BIM and founder of Movement for Actualization of Sovereign State of Biafra (MASSOB), Chief Ralph Uwazuruike yesterday predicted that what is known today as Nigerian nation would break into six different republics before 2023.

He noted that the present pigeonholed six geo-political zones of the country, namely South-East, South-South, South-West, North-Central, North-East and North-West, would metamorphose into the six republics, with South-East becoming the long agitated New Biafra, while South-South becomes Niger-Delta Republic, just as South-West and North-Central become Oduduwa and Middle-Belt Republics respectively, leaving North-East and North-West as Arewa Republic In a press statement issued yesterday in Onitsha, Anambra state,  shortly after BIM’s Anambra South Zonal meeting held at Uga, Aguata Local Government Area of the state, Uwazuruike who was represented by a member of Biafra Elders–in-council, Mazi Chris Mocha, observed that “the obvious lack of  trust in the relationship or union between the northern and southern Nigeria is too inexplicable that Nigerians cannot continue to co-exist as one nation.”

Uwazuruike contended that “the faulty amalgamation of the northern and southern Nigeria in 1914 which expired since January 2014, also made it imperative that the country must surely break up in the near future, based on Biafran constitution which provided that any section of the country that is dissatisfied with the union will be at liberty to secede.” He therefore urged Biafra leaders “to ensure that the federation is run in such a way that the citizens would be happy at all times and willing to belong to Biafra without being forced to do so.”

He insisted that “it was only in a corrupt country like Nigeria where illegality thrives that citizens are forced to live together and always show allegiance to the state”, adding, “we do not deserve Biafra if the emerging republic cannot be better than Nigeria.”