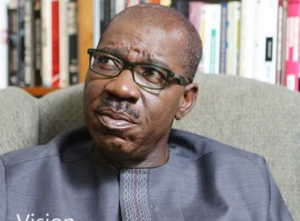 Gov. Godwin Obaseki of Edo has appealed to traditional rulers in the country to support both the Federal and State Governments in the fight against insecurity, saying that collective effort was needed to tackle the menace.

A statement in Benin on Tuesday, signed by the Special Adviser to the Governor on Media and Communication Strategy, Mr Crusoe Osagie, said Obaseki made the appeal while receiving members of the National Council of Traditional Rulers of Nigeria, in his Office.

The delegation was led to Government House, Benin by the Amanyanabo of Nembe Kingdom, Dr Edmund Daukuro. Buhari to monarchs: Ask your subjects to reject money politics in 2019 He said the royal fathers’ support would bring lasting solution to the security challenges in the country which, he said, had become a source of concern to all. Obaseki attributed the high level of insecurity in the country to what he termed the “socio-econonic dislocation and failure to plan appropriately’’.

The governor urged governments at all levels to rise up to the challenge in winning the war against insecurity in the country.

In his address, the Amanyanabo of Nembe Kingdom, Dr Daukuro, also expressed displeasure over the security situation in the country. He said the traditional rulers were meeting in Edo to address the menace and that a communique would be issued at the end of the meeting. NAN