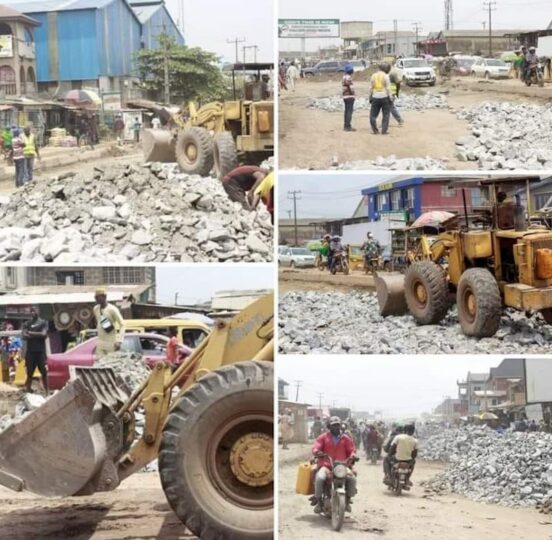 Palliative work has begun on the Sango-Ijoko-Alagbole road, abandoned by the administration of former Governor Ibikunle Amosun.

Amosun had planned to turn the 32-kilometre road into six lanes, with three lanes on each side. But, he abandoned the road after demolishing thousands of properties on the long stretch.

Since then, the road has been in a deplorable state with some residents abandoning their properties to seek accommodation elsewhere, while those who could not move have to contend with harrowing experiences every day.

But, the state Commissioner for Works, Engr. Ade Akinsanya said the state government will make the road drivable by December if the weather permits.

On a tour of the road on Thursday, the commissioner disclosed that due to paucity of funds, the rehabilitation has been divided into six segments.
He also added that one side of the road would be done for now, while the other side will take off when money is available.

Already, contracts have been awarded for segment one from Sango and segment six from Akute with work already going on simultaneously.

According to Akinsanya, the contract has been awarded to the tune of N300million to rehabilitate the remaining four segments by making them drivable before their complete reconstruction.

He said: “The Sango-Akute road is a 32-kilometre road awarded by the previous administration and unfortunately abandoned. What we are doing now is that instead of six lanes, we have re-scoped the road and our contractor is moving to the Sango-Ijoko area, working on that and of course the Lagos end.

“Segments one and six have been awarded. Included in the work is the palliative work that will ensure that from phase 2 to phase 5 should be motor-able from Sango to Yakoyo end.

“The state governor was here about 3 weeks ago to inspect these projects and we have been on this inspection tour since yesterday.”

Akinsanya noted that the Amosun administration, apart from abandoning the road, also failed to compensate those whose properties were demolished.

The commissioner spoke on how some of the projects were being financed through the financial ingenuity of Governor Dapo Abiodun.

“As his Excellency has said yesterday, we have challenges in terms of funds but these are essential roads we need to do and we are finding ways to get them done.

“I am likewise thanking his Excellency, for always doing whatever it takes to help whenever we go to him,” he said.

Akinsanya said some of the road projects will bring about even development in the state, while money invested in them can be recovered through Internal Generated Revenue (IGR).

“Everything is on the table, and one of the things we need to look at down the road is the question of how do we recover the money we invested on this road one way or the other?

“One thing is that probably when the road is done and development comes to the area, there will be an increase in the Internal Generated Revenue (IGR) and at the same time the maintenance of cars, health and others will be improved and we are going to do what is needed by using the criteria of the Average Daily Traffic (ADT),” he said.

A journalist, publisher and former Chief Press Secretary (CPS) to Akinwunmi Ambode, former Lagos State governor, Habib Aruna, who was on the tour, commended Governor Abiodun, the commissioner and the state government for working hand in glove to ensure that even development reaches every nook and crannies of the state.

He said: “I am impressed because I saw a governor that is working, purposeful and pragmatic in managing the affairs of the state. I am also happy but not surprised because he has a commissioner for works and infrastructure who knows his onions and is super enthusiastic about his job, hence.

“We all can see and cannot deny the fact that these projects are taking place all over the areas of the state and I think the government should be applauded for doing such genuine work.”