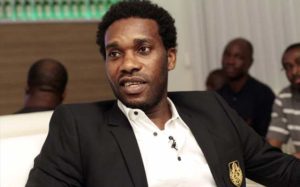 Former Super Eagles captain, Augustine Azuka “Jay Jay” Okocha has added another landmark to what is already an extraordinary life. The former footballer who is regarded as one of the greatest African players of all time recently celebrated 21 years of marriage to his wife, Nkechi which has produced two beautiful children, a girl and a boy, both of whom are already grown.

The man who wowed thousands with his mercurial football artistry – sharp-shooting, dribbling skills, mazy runs, spectacular step-overs and flicks – got married over two decades ago while he was still plying his professional football trade in Europe. His wife, Nkechi has been nothing but loving and supportive throughout his career. Now that he is retired, he spends a lot of time with her and their two children, Daniela and Ajay.

Much like in every other relationship, it has not always been plain sailing for the Okochas. There was a time when things threatened to go out of hand as unsavoury rumours flew all over the news. But much like he eyed many an opposition wall before deftly bending a sublime free kick into the top corner, Jay Jay was able to conquer the adversity and the family is closer than ever before.

The man who was made the chairman of the Delta State Football Association in 2015 tries to shield his family from the spotlight but such are the trappings of fame that he cannot be totally successful. He even indulges in the rare moment of giving his fans glimpses into his personal life like when he shared pictures of the family when they celebrated their 20th wedding anniversary last year.

Nkechi and Jay Jay are one of the most popular sports couples around. She complements him and he completes her. While she maintains the home front, Okocha is out earning the big bucks even after retirement. He is reportedly worth 150 million and has numerous endorsements including a recent one with premium betting company, BetKing.