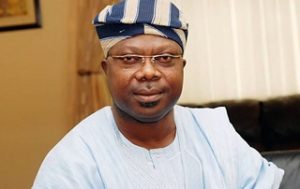 The Chairman of the Social Democratic Party in Osun State, Chief Ademola Isola, has said the leadership of the party in the state is not aware of the intention of Senator Iyiola Omisore to contest the governorship election.

Omisore had on Saturday picked the expression of interest form in Abuja to contest the September 22 governorship election in Osun State.

But the state chairman of the SDP on Monday at a press conference in Osogbo said the intention of the former deputy governor of the state was unknown to the party in the state.

Isola said Omisore had been relating with the national secretariat in Abuja but had not presented himself to the state chapter of the party since he defected to the SDP from the Peoples Democratic Party.

But the Secretary of the SDP in the state, Mr. Taiwo Akeju, who was not at the press conference, said the chairman’s statement should be disregarded, saying Omisore was known to the party in the state.