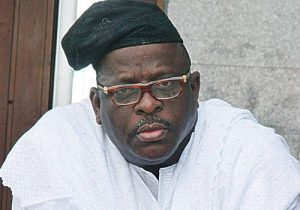 The Court of Appeal, Ado Ekiti, on Monday stayed the execution of the judgement of the Federal High Court, Ado Ekiti, recognising the Chief Makanjuola Ogundipe-led South-West zonal executive of the Peoples Democratic Party.

The appellate court also stayed the execution of the judgement restraining Dr. Eddy Olafeso-led South-West Zonal exco of the PDP from functioning.

The applicants are the PDP, the National Caretaker Committee Chairman, senators Ahmed Makarfi and Ben Obi.

The contention was about the group that will attend the December 9 national convention of the PDP in Abuja.

Ogundipe is leading a group loyal to the ousted PDP National Chairman, Ali Modu Sheriff, while Olafeso is leading another group recognised by Makarfi.

Ogundipe’s group has the support of the senator representing Ogun East, Buruji Kashamu, while Olafeso’s group has the backing of the Ekiti State Governor, Ayodele Fayose.

The three-member panel presided over by Justice Ahmad Belgore also stayed all proceedings before Justice Taiwo Taiwo of the FHC, Abuja.

Efforts by Ogundipe to frustrate the appeal from being heard on Monday were thwarted by the panel.

He had written a letter saying he was not properly served with the hearing notice.

In arriving at the order, the appellate court after hearing Olowolafe Sunday for the applicants and Idowu Mafimisebi for the seven to 17th respondents, took cognisance of the pending application to commit Olafeso and others to prison.

The case was scheduled for hearing on Tuesday (today) before Justice Taiwo.

Ruling, Justice Belgore held, “Upon the court not hearing the motion on notice herein because there is no proof of service of the hearing notice on the second, third, fourth and fifth respondents; all the interim orders already made by the Federal High Court, Ekiti, in suit no: FHC/AD/C5/18/2017, contained in the ruling of Hon. Justice Taiwo Taiwo, delivered on October 17, 2017, November 8 and 27, 2017 are hereby stayed pending the hearing and determination of the motion on notice filed on November 29, 2017.

“All proceedings before the Federal High Court, Ekiti, in respect of the suit are hereby stayed in the motion pending the hearing and determination of the motion on notice.

“The interim orders made herein also affect the appeal. The motion on notice is hereby adjourned till January 15, 2018.”

Before granting the order, Justice Belgore had asked Makanjuola, which faction he belonged to. He replied that he belonged to Sheriff’s faction. The judge also asked him which faction was declared as authentic by the Supreme Court to which Ogundipe answered Makarfi.

Counsel for the applicants, Olowalafe had informed the court of alleged underhand deals aimed at frustrating the appeal.

He said it was curious that Forms 48 and 49 were filed together and Justice Taiwo allegedly was ready to hear the application to commit Olafeso and other members of his group to prison for contempt.

He said, “The orders were granted ex parte on October 17, 2017, having filed same application on October 16. Knowing that its lifespan was 14 days, it was further extended on November 8, 2017.

“On that same day, all parties were in court, but to our chagrin, the matter was adjourned sine die to when the court will call the parties at its own discretion to give us hearing notice.

“Curiously, on November 27, 2017, the same court that had adjourned sine die, sat on a matter ex parte, making all frantic efforts in conjunction with Makanjuola and his cohorts, attempting to commit the National Chairman and Secretary to the National Caretaker committee, Senator Ben Obi and others to prison for contempt of court.”

Reacting to the order, Olafeso thanked all members of the PDP for the victory “over the forces of darkness. Specifically, I thank our leader and the Governor of Ekiti State, Ayodele Fayose, for his commitment to saving our party from this cankerworm. I cannot thank him enough.

“Today’s proceedings at the Court of Appeal, Ado Ekiti should be a clear message to those who have used crooked judicial process to hold our party down that their game has come to an inglorious end.”