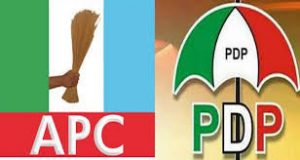 Some stalwarts of the Peoples Democratic Party (PDP) over the weekend joined the ruling All Progressives Congress, APC, at Ondo West Local Government Area of Ondo State.

The defectors were received by the Senior Special Assistant (SSA) to the governor on Research and Documentation, Kunle Adebayo.

A former PDP Ward 12 chairman, Sarafadeen Adewale, who spoke on behalf of the decampees, said it was the leadership qualities of Adebayo that encouraged them to join the APC.

He also attributed the achievements of Governor Akeredolu, especially in the area of infrastructural development of the state as another factor.

They pledged to work with progressives party to deliver their respective political units in this year’s governorship election.

In his response, Adebayo appreciated the courage of the decampees to fully join APC without any financial inducement.

According to him, there are two parties in Ondo state, the APC and the PDP, and so the options are clear for the people to make.

He rẹ-assured them of equal opportunities and legitimate patronage in the party.

“The decampees should justify their movement into APC with serious mobilisation for the re-election of the governor in their individual political units and wards in this year’s gubernatorial election.

”Some have said we are fighting ourselves inside the party here. It is a lie. We are one great family. Hear me, all the leaders are united and strong. We will bring joy and development to our people. We will win for Aketi

“You have seen the light, you must go home and clean the house. Bring every member of PDP in your unit to this Aketi family. Tell them we care for Ondo State. We care for your children, your wives and families. Tell them to come all on the day of declaration. Show the way.”