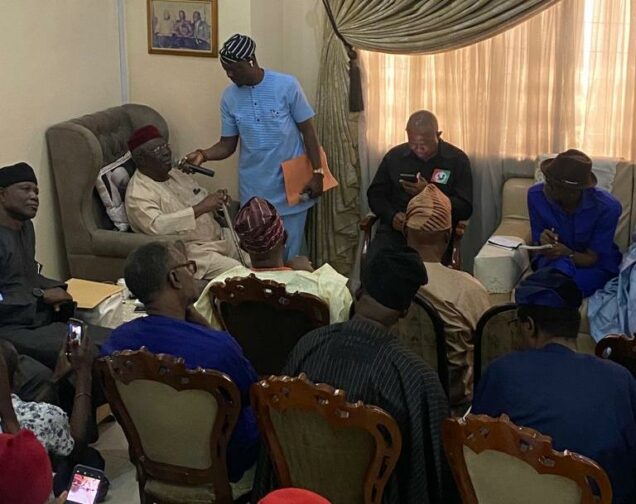 The pan-Yoruba socio-political organization, Afenifere, has replied to the statement credited to Governor Rotimi Akeredolu over the group’s endorsement of Peter Obi.

The Ondo State governor had in a statement said “Afenifere doesn’t speak for the Yoruba people on the endorsement of Peter Obi and that Afenifere is divided in respect of the purported endorsement.”

However, Afenifere in its response to Akeredolu said the decision to support Obi was a corporate decision of members of the group and some socio-cultural organizations in the country.

The statement from Afenifere read in part, “The attention of Afenifere has been drawn to the statement credited to Akeredolu on the Afenifere’s endorsement of Obi for the 2023 presidential election.

“To start with, we wish to reiterate the principled stance of the Afenifere that the next President of Nigeria should be from the South, and all things equitably considered, from the South-East, for which we consider Obi by his verifiable records as a two-term governor of Anambra State, the most competent and suitable. It is a well-considered corporate decision debated for over a year of regular monthly meetings, validly conveyed in the best tradition of the organization.

“While we have our respect for Akeredolu and his colleagues of the Southern Governors Forum, which he leads, on their stand that it is only equitable that the next President of Nigeria after eight years of Buhari of Northern Nigeria extraction, should come from the South, we will not lend our support to those who betray that cause for the lucre of vice presidential porridge or those who see equity only from the parochial prism of their ethnic benefits.

“We wish to state for the umpteenth time that Afenifere is not an apolitical Yoruba socio-cultural organization but, from its inception, political machinery as the embodiment of the worldview of the Awolowo School of Thought on how Nigeria, a country of ancient and entrenched nationalities, may best be equitably, inclusively and peacefully governed. These thoughts are encapsulated in the theory and practice of true federalism in its equitable and logical dimensions.

“Finally, let it be said that Afenifere is not alone in this decision that the next President should be from the South and South-East specifically. Afenifere conveyed its resolution through a press conference on September 26, 2022, and the Middle Belt Forum which converged in the Jos Township Stadium on September 28. Other ethnic nationality organisations, particularly of the Southern and Middle Belt Forum, of which Afenifere is a member and other well-meaning Nigerian leaders, are in agreement with this resolution which the nation needs most for an all-inclusive sense of belonging and attendant peaceful coexistence.”
Share