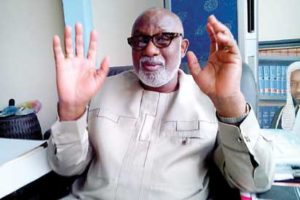 AHEAD of the All Progressives Congress, APC, primaries in Ondo State, Governor Rotimi Akeredolu, weekend, asked members of his cabinet eyeing political seats to quit forthwith.

Only four commissioners: Donald Ojogo of Works Ministry, Timehin Adelegbe of Commerce, Gboyega Adefarati of Agriculture and Olawunmi Olatunji of Women Affairs have picked nomination forms to contest for National Assembly seats. Also, a Special Adviser and former Speaker of the House of Assembly, Mr. Victor Olabimtan and the Special Adviser to the governor on Health, Dr Jibayo Adeyeye have purchased forms.

A statement by the Akeredolu’s Chief Press Secretary, Segun Ajiboye said the governor had “directed that members of the State Executive Council, who have obtained nomination forms to contest for political offices in the 2019 general elections, are to put in their letter of resignation on or before Monday, 17 September, 2018.

A News paper gathered that others nursing ambition were let go following reports from their field soldiers that they may not likely secure the party’s  ticket at the primaries.

“The governor, on behalf of the good people of Ondo State, expresses his deepest appreciation to members affected by the directive for their contributions and services to the state.

“Following preparations towards the 2019 general elections and subsequent expression of interest of some Executive Council members to contest for political offices, Mr. Governor has directed that any member who has obtained nomination form to contest election into any political office is to put in his/her letter of resignation on or before Monday, 17th September, 2018.