Resume work today or be fired – Wike to doctors 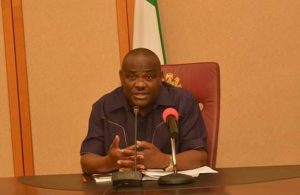 Rivers State Governor Nyesom Wike has threatened to  sack  striking resident doctors of the state university teaching  hospital, if they failed to return to their duty posts today.

Members of the National Association of Resident Doctors (NARD) on  Monday resumed a nationwide strike over their welfare.

The members in  Rivers State, who claimed  the governor had yet to  address outstanding issues affecting them, had vowed not to call off the strike..

But, Wike, in a statement yesterday by the Secretary to the State Government (SSG), Tammy Danagogo said it could not understand why doctors on its payroll joined their colleagues who are federal employees.

The statement reads: “Sequel   to the ongoing strike action by the Rivers State chapter of the National Association of Resident Doctors (NARD) with respect to irregularities in the payment of salaries of house officers by the Federal Government, the Rivers State Government hereby directs all resident doctors under the employment of the state government to call off their strike action immediately.

“We are therefore unable to decipher why resident doctors in the state will embark on sympathy strike with their counterparts in the employment of the Federal Government.

“To this end, the Rivers State Government having reaffirmed its position with respect to the above, will not tolerate further strike actions by resident doctors in Rivers State and will be compelled to invoke the “No Work, No Pay” rule on striking house officers.

“We therefore direct all resident doctors to call off the ongoing strike in the state and return to work within 24 hours  or forfeit their salaries and risk being sacked..”