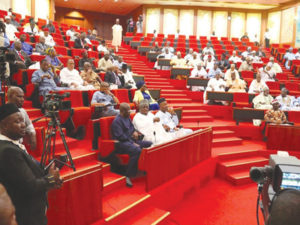 The Senate yesterday passed the N243.374 billion 2019 budget bill of the Federal Capital Territory (FCT) as well as eight other bills.

This was sequel to the presentation of the bill by the Senate Leader, Senator Ahmad Lawan for second reading after which it went through clause by clause approval by the Senate Supply Committee for third reading before being passed.
A breakdown of the budget shows that N55.043 billion is for personnel cost; N57.610 billion is earmarked for overhead cost, while capital projects will gulp N130.720 billion.

Six out of the other bills passed by the Senate were from the House of Representatives and went through concurrence after lead debate by Senator Lawan.

The approval followed the recommendation of the Senate Committee on Local and Foreign Debts.

Presenting the report, the Committee Chairman, Senator Shehu Sani, said the fund for DPO from the World Bank is proposed to finance key programmes of the government of Niger State.

This, he said, was aimed at stimulating internally generated revenue and developing critical infrastructure that will attract private investors to the state and thus increase employment opportunities for the residents and citizens.

According to him,”the World Bank Development Policy Operation (DPO) is a budget-support facility to finance budget gaps that governments often encounter in implementing their annual budgets.”

Sani pointed out that the credit facility has an attractive low financing data of 1.25 per cent interest; moratorium of five years and a 25 years maturity tenor.

“According to the latest data from the Debt Management Office (DMO), Niger State has a total debt stock of $232.1million.”

He added that “approving the current loan request of $266 million for Niger State will bring its total debt stock to $498.1million.”

The Senate had on July 27, 2017 and November 9, 2017 at its sittings, mandated the committee to consider the Niger State’s DPO as contained in the 2016-2018 approved external borrowing plan, following its approval of the loans’ request for a total of seven states.
The Senate also yesterday moved to discourage the Almajiri system in the northern part of the country.

This was sequel to Order 43 moved by the Senate Leader, Senator Lawan who submitted that the Senate should encourage state governments especially in the north to fund education of children.

His words : “Even though it is controversial, a time has come in those states where the Almajiri system was established for over 100 years, to consider and see how we can work out a system that will ensure the Almajiri system should not continue in the way and manner that it is today because if we want to bring people on board why not tampering with the religious learning why not provide a climate conducive for these children who roam the streets to go to formal schools without compromising their learning for religious benefit.

“I believe that this is going to be a major issue because we have to transform this sector if want to ensure that these people contribute to national development and also reduce the chances and the risk of getting these people recruited into insurgency and banditry.

According to him, the major source of insecurity today in the country is probably the neglected section of the society particularly those without formal education.

“We have children within the age bracket of 16, 17 and 18; when they become adults have been involved in insurgency and all manners of criminal activities including armed bandits.

“I believe it is time for the government to walk the talk provided for in the compulsory and universal Basic Education that we have consciously passed as legislators since 2004.

“This Senate may be winding down but we owe it a duty to hold discussion as much as possible on this matter to ensure that our children are not left on the streets because whether we like or not those who are not in school are prone to all manners of influences and even criminal activities. If we are fighting crime and insurgency, we must be looking at the sources of recruitment. The recruits are there. Those of 17 years of age who are supposed to be in school are roaming the streets.
On his part, Senate President, Dr. Bukola Saraki, disclosed that the 8th Senate had passed some bills to improve the funds for Universal Basic Education Commission (UBEC) to reduce the percentage of contribution to states so that it is possible to access funds up to UBEC level.

“We owe it a duty that in this area there is a great improvement because unless we address the issues in the education sector we would not prepare our children for the challenges ahead of them in the world. Education is the greatest assets of any nation and that of our children. As representatives of the people we would do our best to make the future better for our children,” Saraki said