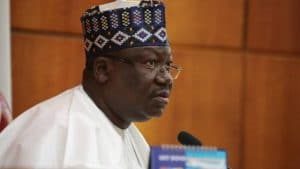 President of the Senate, Ahmad Lawan has called for the inclusion of anti-corruption course in schools’ curricula to reduce the menace of corruption in the country.

Special Adviser (Media) to President of the Senate, Mr Ola Awoniyi, quoted Lawan in a statement as making the call while declaring open the third Economic and Financial Crimes Commission (EFCC), National Capacity Building Workshop for Justices and Judges.

According to the statement, the workshop was organised in collaboration with the National Judicial Institute (NJI) held in Abuja on Tuesday.

The Senate President advocated for a review of the basic school curricula to include the teaching of anti-corruption tenets.

“I believe that we should look at our civic education. We shouldn’t wait until people commit corruption before we start chasing them.

“We should start educating our children in schools, basic education secondary level and even tertiary level, on the ills of corruption in any society.”

Lawan also said that the National Assembly would provide the necessary support to the anti-corruption agencies in the fight against corruption.

The EFCC and Independent Corrupt Practices and Other Related Offences Commission (ICPC) are the leading government agencies in anti-corruption war.
According to him, the 9th Senate and indeed the National Assembly will support the anti-corruption agencies to the best of its ability, to enable us eradicate the malaise.

“What we face today in the area of corruption requires that all hands must be on deck to fight it. And we are determined to work with other arms of government to fight it.

“It is a fight that should be fought by all and we are ready to initiate moves that will help in ensuring we succeed in the fight.

“We are also continuously prepared to support agencies like the EFCC and professionals like the Justices and Judges always,” he said.

The president of the senate noted that corruption had eaten deep into the very fabric of the society and had literarily became endemic.

He acknowledged that the government of President Muhammadu Buhari had done a lot in the last couple of years in fighting corruption but added that the fight had surely not been an easy one.

“Dealing with corruption is surely a task we must undertake very well. The consistency of the EFCC on its mandate is quite commendable.

“The best we can continue to do in our circumstance is to encourage anti-corruption agencies like the EFCC and the ICPC to discharge their mandate very well.

“The police are also inclusive because of their statutory responsibility of enforcing law and order, by preventing and detecting crime,” Lawan said.
He said the Justices and Judges need all the ethical, moral and institutional support to be exemplary in the discharge of their duties.