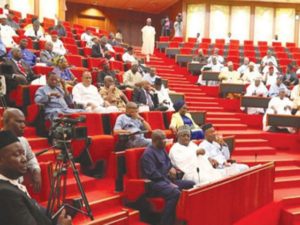 This was sequel to the adoption of the report of the Senate Committee on Finance headed by Senator John Enoh (Cross River Central) presented at plenary which considered a motion on “the urgent need to review the excise tariff increment in order to save local distillers of beverages from looming extinction.”

The Senate, however, advised that a tariff hike of not more than 50 per cent should be adopted, “as it becomes necessary for the federal government to increase the tariff rate in order to boost revenue generation as the rate will provide more leniency to the affected manufacturers and give more hope for the survival of the indigenous companies.”

It also resolved that there was serious need to increase the import duties of foreign alcoholic beverages and tobacco products in order to give local indigenous companies more competitive edge.

The upper legislative chamber advised the federal government to sensitise and carry along the producers and consumers of alcohol and tobacco products to understand the need for the increase and its advantage in adding to the economic fortune of the country.

The Senate further agreed that if the new excise tariff rate was allowed to be implemented by the government, it would stand at about 500 per cent after the three years incremental period.

The lawmakers also argued that if the tariff was fully implemented without review, it was capable of compelling affected companies that could not stand with the new rate to either shut down or relocate their full operation to neighbouring African countries with favourable and flexible taxation policies for the sector.

The increase in the excise tariff rates on alcoholic beverages and tobacco products was approved by President Muhammadu Buhari after the adoption of the recommendation of the Tariff Technical Committee of the Federal Government.

It was reported that the federal government resolved to increase the excise rate because of its drive to increase revenue generation and the belief that taxation is a veritable tool in controlling the consumption of alcohol beverages as they have negative health effect on consumers.

The Manufacturers Association of Nigeria (MAN) had at a public hearing organised by the Senate raised the alarm that the increase would give more competitive advantage to foreign products because foreign products would not be affected by the increment.

MAN which described the increment as “outrageous as it stands at 500 per cent,” added that “if the new rate is fully implemented after the three years incremental period, it is believed that a number of the local manufacturers will have no other option than to suspend operation.”