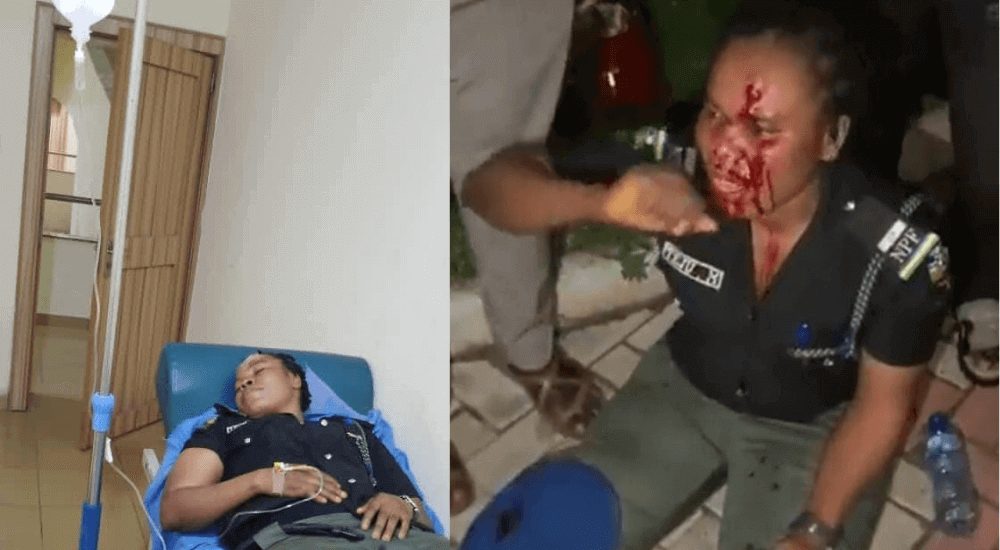 An orderly assigned by the Nigeria Police Force Headquarters to one Professor Dike Zainab has been admitted to a hospital for medical treatment after she was allegedly tortured at the behest of her boss.

The situation, captured in a viral video, was said to have occurred at the Area 11 axis of the Federal Capital Territory (FCT).

The orderly whose name is unknown as of press time was captured seated on a floor, with part of her face and uniform, covered with blood stains.

From the left side of her forehead flowed blood as she wept in excruciating pain while struggling to stay alive. All she kept asking was to be taken to the hospital to save her life.

“She told her boys to kill me,” she said incoherently as she spoke to her direct head on the phone to be allowed to be taken to the hospital.

While the video appeared to have been shot at night, THE WHISTLER cannot immediately ascertain when the incident occurred. Still, background voices captured in the video reprimanded a certain woman in a manner that appeared she was the boss.

Later on, an emerging picture on Twitter showed that the officer had been admitted to an undisclosed hospital, receiving treatment.

Nigerians had reacted to the incident and called the attention of the Police Public Relations Officer (PRO), CSP Olumuyiwa Adejobi to the video calling for justice and the prosecution of the culprit.

Although some questioned the rationale for attaching an orderly to an academic, others said the culprit may not be sanctioned due to her high-profile status.

The video caption claimed that the orderly was beaten by the maids to her principal and it is still uncertain whether the culprits have been arrested.

However, as of press time, neither the PRO nor the Police authorities have officially reacted to the incident which is unusual, particularly for the PRO whose engagement on Twitter, with Nigerians has not gone unnoticed since his emergence.

The PRO, this newspaper observed became less interactive and engaging on his Twitter handle over the last two days.

This development is believed to have resulted from his reaction to the last incident of an assault of police officers which was largely “misrepresented”. The police had stepped in to control the damage.

Assault on police officers has been exacerbated in recent times, and according to the police, it is a criminal offence that contravenes extant laws and disrespects the nation.

THE WHISTLER made various efforts to get the PRO’s reaction to the situation. A call made to his phone was not answered while text messages sent to him were also not replied to as of press time.