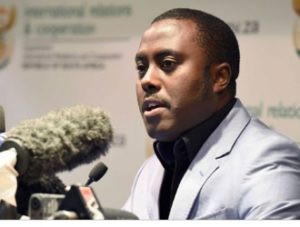 Clayson Monyela, spokesman of the Department of International Relations and Cooperation (DIRCO) in South Africa, says Nigeria overreacted to the recent xenophobic attack in the country.

Businesses of Nigerians based in South Africa were targetted in the attacks which made the federal government summon Bobby Moroe, South Africa’s high commissioner to Nigeria.

Nigeria also pulled out of the World Economic Forum which held in South Africa while President Muhammadu Buhari sent Ahmed Abubakar, director-general of the National Intelligence Agency (NIA), to convey his feelings to President Cyril Ramaphosa over the incident.

There were reprisal attacks across Nigeria, leading to MTN shutting down its offices nationwide. Some Shoprites stores were also looted while South African mission in Nigeria suspended operations.

But Monyela said despite the fact that not a single Nigerian was killed in the incident, the country was the “most vocal”.

According to City Press, a South African platform, Monyela said the Nigerian special envoy left South Africa having “understood the overreaction by their country” over the xenophobic attacks.

“Ten out of the 12 people killed during the public violence are South Africans and two Zimbabweans. They were told ‘not a single Nigerian was killed yet your country is the most vocal’,” Monyela was quoted to have said.

“A challenge was thrown back at them to play their part in addressing the big challenge of international migration.

“The problem is that sending countries do not help much in creating a conducive environment that will not force citizens to leave their countries in droves and only speak out when there is a problem in the receiving country.

“It is a problem not only South Africa but in the UK, US and other countries which are overburdened with the responsibility of hosting foreign nationals.”

On the issue of compensating Nigerians who suffered losses during the attack, Monyela said they made the envoy aware that South African businesses were also attacked in Nigeria in reprisal. He said they would have to be compensated too if Nigeria maintains its position.

“We said to them, in South Africa we expected businesses to be registered and pay tax and that they should advise those affected to produce all the documents so we can help them claim from insurances as it is also expected of businesses to take liability insurance,” Monyela said.

“There were those reprisal attacks on South African businesses, and we told them ‘if you raise compensation, we will also raise it in your country.”

He noted that the engagements with the envoy also ensured that diplomatic ties between South Africa and Nigeria remain intact.

“Diplomatic ties remain strong. This is why Nigerian President Muhammadu Buhari is still coming to South Africa on a state visit from October 3,” he said.

“Nigeria and South Africa are the biggest economies on the continent and any squabble between the two does not help Africa.”

Ramaphosa had on Sunday dispatched three envoys to Nigeria and six other countries to deliver messages of pan-African unity.

Khusela Diko, a presidential spokesperson, said the envoys will also brief governments in the identified African countries about the steps that the South African government is taking to bring a stop to the attacks and hold the perpetratorto account.