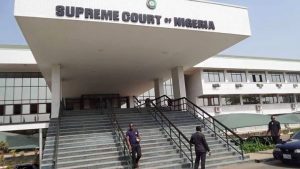 The Supreme Court Wednesday upheld the election of governors Okezie Ikpeazu of Abia State, Ifeanyi Okowa of Delta State and Darius Dickson Ishaku of Taraba State, a development that resulted in jubilation to the Peoples Democratic Party (PDP’s) camp.

Several litigations had trailed the March 2019 governorship elections across states of the federation, but the seven-man panel of the apex court presided over by Justice Bode Rhodes-Vivour, affirmed their electoral victory.

In its judgment, the Supreme Court held that the appellants failed to lead credible evidence to prove their petitions and that the governors were lawfully and validly elected.

The panel heard the appeals on the various governorship tussles one after the other in a sitting that began before 10am and for which judgement was fixed for 2pm.

Justice Galunje said it would be wrong for any petitioner to rely on the card reader to prove over-voting, adding the mere dumping of documents before the court was inappropriate and that the lower courts were right in dismissing the appeal.

In upholding Okowa’s election, Justice Centus Nweze, who delivered the lead judgement dismissed the appeal by Chief Great Ogboru of the APC.

On Taraba State governorship dispute, it affirmed the lower court’s decision that the APC had no candidate in the March 9, 2019 governorship poll by virtue of disqualification of its candidate, Abubakar Danladi, by the Jalingo Federal High Court on March 6, 2019.

The court held that the appellant’s petition was incompetent, non-standard, flamboyant and was, therefore, dismissed.

It also struck out an appeal filed by Umar Mohammed Nasco of the PDP challenging Sani Bello’s victory.

Delivering judgment, Justice Mary Uwani Abaji, held that the apex court would not tamper with the concurrent decisions of the Election Petition Tribunal and the Court of Appeal.

When Abia State was called Lateef Fagbemi, counsel to the appellant, Dr. Alex Otti of the All Progressives Grand Alliance (APGA), told the court that nothing good should be expected from someone who rode on fraud to power.

He noted that there was failure of the card Reader in the state and rather than postpone the election, INEC went ahead to conduct election in violation of paragraph 11 of its law.

The three respondents urged the court to adopt their briefs as their arguments and affirm the judgment of the lower court, which had earlier upheld the election of Ikpeazu.

Counsel to the second respondent, Chief Wole Olanipekun (SAN), filed his brief on December 28 and asked the court to dismiss the appeal, which ordinarily, would not have come to the Supreme Court.

But Uzoukwu stated that the third respondent in rejecting the appeal, filed its brief on December 20, 2019, arguing that the case was instituted based on over voting.