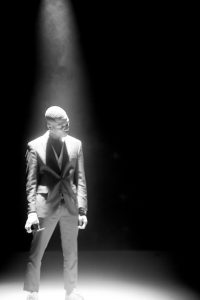 On April 2, Tecno Mobile launched its latest flagship phones, the Tecno Camon 15 series, in Nigeria. But not able to proceed with what it had spent the better part of 2019 planning—a mega press event to match the grand personality of the devices and the company’s first ever brand ambassador—Tecno and its agency, SBI Media, pivoted to a more fitting online only presentation format. Why? A government-directed social distancing policy in the wake of the global coronavirus pandemic.

Tecno’s new brand ambassador is Wizkid. He is a Grammy nominated afrobeats singer with chart-topping solo hits and collaborative anthems with superstars such as Drake and Beyoncé. The Camon 15 launch was intended to be the moment when Nigeria’s largest smartphone brand would fuse itself with Africa’s biggest pop star and further boost its visibility.

So, would the government’s sit-at-home order, which had begun to slow down business activities all over the country, put paid to Tecno’s grand ambitions?

As the world is being forced to learn new modes of commercial interactions under the cloud of Covid-19, digital connectivity has become more vital. And as if to beat this fact harder into the world’s consciousness, we are seeing the stock of large oil and gas companies and manufacturers plummet while the future of tech companies, except meeting apps such app Zoom, become indeterminate.

But why have device makers such as Tecno Mobile continued to release new devices despite the outbreak of the novel coronavirus? Why, for example, did Apple on March 24 debut a new MacBook Air and iPad Pro, even if it had to cancel its WWDC conference? Why is the same company going ahead with the planned announcement of its first 5G phone, the iPhone12? Analysts put the answer down to one word: hope.

Although widespread reactions to the pervasive fall in stock prices, empty boardrooms, and general uncertainty suggest that 2020 may be the dawn of a dystopian world, there remains sufficient optimism among investors that Earth will recover from this shock incident.

Business Insider quotes Wedbush Securities analyst Daniel Ives writing to his clients in March that, “In a nutshell, this remains a major holding time for investors in Apple and clearly there will be some speed bumps along the way as Cupertino navigates the coronavirus outbreak. However, we continue to focus on the golden installed base, pent up iPhone upgrade demand activity, and 5G super cycle (remains intact) on the horizon as key to our bull thesis.”

Besides, when businesses find a way to carry on despite the limitations imposed by the pandemic, they inspire the human population to preserve their own enthusiasm. In the current state of things, life has retained its meaning majorly because mobile networks, for instance, still maintain their routines and entertainment sources like Netflix or DStv keep audiences engaged.

As for Tecno Mobile, its early April launch not only needed to be seamless, delightful and reassuring, it also needed to reach as many people as possible. So, working off the theme “Magic of Unseen”, the keynote showcased the device’s trademarked TAIVOS technology, the 64MP quad camera, 6.6” almost edge-to-edge screen, and 5000mAh battery, among others.

Other attractions included the largest flipbook in the world according to the Guinness Book of Records, and a highly detailed 1.1m portrait of Wizkid, printed from a photograph of the superstar taken with the Camon 15 Premier and zoomed 8x.

Of course the climax of the evening was the arrival on stage of Wizkid. You could tell that he was pleased to be there, albeit virtually. Sources inside Tecno Mobile say his deal with Tecno Mobile was end-to-end, meaning he’d be speaking for the brand on possibly everything. A rumoured nine-figure contract, which would make it the largest of its kind in the country, would absolutely justify this task.

Apart from the money, though, Wizkid said he accepted to be Tecno’s spokesperson because in some ways there was a connection between them. “My team and I had a series of meetings where we looked at the history of Tecno and we saw something undeniable,” he said. “There were similarities in both of our personalities. Tecno has relentlessly risen through the ranks over the years, just as I have. We both have risen beyond obstacles and are now global; creating opportunities for others and reminding Nigerians that they are capable of achieving and becoming whatever they desire to be.”

At the end of the day, it looked like Tecno’s Camon 15 launch hit it out of the park. More than 17,000 tweets were recorded during the livestream that pulled in over 24,000 simultaneous viewers on YouTube and Facebook, eventually pushing the conversations to reach 80 million people. As that night showed, events like this might even be the way to go in future.

“Especially with the way and manner businesses adapted to remote operation during this Covid-19 outbreak, digital marketing will continue to take centre stage,” says Rotimi Bankole, CEO of SBI Media Group, the Lagos-based media communications company that has worked with Tecno Mobile for more than three years. “TV will also further evolve into digital forms becoming more mobile and real time. Streaming and on-demand platforms will become mainstream and people like us will need to adapt and fit in.”

Speaking of adaptation in tight situations, Mr Bankole, with a master’s in mass communication from the Lagos State University and professional certificates from the Lagos Business School, has been there done that. Since he started SBI Media in 2013 as a solopreneur crisscrossing the streets of Lagos on the heels of prospective clients, he has built his media buying and planning operations into a group of enterprises with more than 50 people permanently on staff.

By official calculations, SBI’s revenue has grown by a minimum of 50% year on year since 2015, outperforming the estimated industry average by more than 30%, going by projections from PwC for the Media and Entertainment sector. Now the agency runs all the media and creative accounts for Transsion Holdings, owners of iTel, Tecno, Infinix as well as Boomplay and Transnet. In 2019, SBI Media also brokered the agreement between Nigerian Super Eagles scorer Ahmed Musa and Syinix Electronics, the household appliance manufacturer.

SBI Group’s growing partnership with Transsion installs it at the forefront of an evolving African marketing communications movement for the 21st century. It also affords it tremendous influence for a company that is barely seven years old.

“Basically, Transsion gives us that very huge position in the smartphone industry, because they command more than 50% of the Nigerian mobile phone market,” agrees Samuel Odusami, group head of strategy at SBI. And such substantial clout can be parlayed into record-breaking contracts in other sectors — which is why the SBI portfolio now also includes Access Bank, First Bank, Sterling Bank, and Turkish Airways.

Bankole believes his agency has thrived this well because it is open to trying new ways of doing business. Before now, for example, Nigerian media independents usually sought to solidify their local and continental positions by linking up with established global networks such as McCann and Omnicon but SBI Media chose a different direction to reach the same objective.

In 2018, it joined with other media planners and buyers to form Masscom Global. As at Q1 2020, more than 50 agencies from Africa, Asia, and the Middle East have signed up to the network, and positioned Masscom Global as the “most robust” media agency network for emerging markets.

After SBI Media won the 9Mobile media account in January 2020, Bankole said his vision to erect an all-round tech media agency was coming to fruition. Not only was SBI now the agency of record for the country’s largest supplier of smartphones, by being the media agency for one of the Big 4 telcos in Nigeria, it had also become an important player on the network side of things.

“With the arrival of 5G technology, the industry will see more investment and a need to innovate and communicate,” Bankole says. “This is why we are making artificial intelligence, big data analytics, quantum cloud computing, and real-time automation major business drivers. By doing this, we hope to lead the market in the area of information and communication technology innovation.”

As an unflinching believer in teamwork and long-term partnerships with his clients, Bankole says he looks forward to the rest of 2020 that would even be more rewarding for both his company and its clients. He declares: “With the use of cloud and virtual technology, our operation is running optimally.”

With the Tecno Camon 15 launch event of April 2, that buoyant assertion was put to the test. And, as far as anyone could see, SBI Media passed.

@@dailyrecordng
Previous Learn The Secret of Longer Client Relationships from Rotimi Bankole, SBI Media CEO
Next FCMB reacts to video of a customer who collapsed at its Lagos branch, debunks COVID-19 claims