The Biggest Enemy of Mankind Is Time 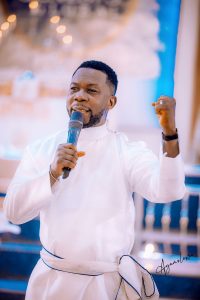 …Real Reason GoodLuck Jonathan lost Re- Election In 2015
+ It’s Tinubu’s Time, But he should be cautious of betrayals within his camp

What you do with your time determined how you will fly higher and be successful in whatever you do in life, One school of thoughts says “Time is wealth therefore if you use your precious time well; you will definitely ends well

Those are the words of Prophet Isreal Oladele Ogundipe at a program Tagged ‘Restore’ held at the Ikeja Branch of Genesis Global Church at plot 6a Lateef Jakande Road Agidingbi, Ikeja, Lagos Nigeria

Speaking on the Theme “Important of Time”, Genesis as he is fondly called said God is able to do all things for those that believed in Him, he said when you have time for God, in return, God also will have time for you in a special way as the man of God said further, that he remain a Celestia Prophet and that will not change is focus just because he has devoted all his time to serve God and that has never change anything but God continue to bless him Inna tremendous ways

While speaking on the outcome of the 2015 Presidential election where the seating President Goodluck Jonathan Ebele failed to be re-elected, the Global Prophet said Jonathan was not brave enough, why because he has everything at his disposal to cancel that election, using the kidnapped Chibok Girls as a flimsy excuse, he said they plan for him and because of his ignorance he fell into the trap, Ignorance was the main caused of Jonathan Loss, the man of God also warned Tinubu to be cautious, very vigilant and be conscious of people around him, in his prophesy says truly speaking Tinubu has 💯 chances of winning 2023 Presidential Election but as it’s stands and with what he can see many enemies has been planted in his group to betray and jeopardised his Presidential 2023 ambitions, he further said, even among the youths are full of betrayals, says if Tinubu can be extremely careful he would overcome those challenges and opportunistic betrayals plotted in his camp to surround and to watch all him Political move.

On the final note the man of God said the next program at Ikeja Genesis Global will be continue next sunday, promises to be brutal as the raw mighty hands of God would perform wonders he therefore called on every one present at the meeting to come along with their friends and family because the next conference will witness the words, prophecy, healing and deliverance at same venue of the Ikeja Branch at plot 6a Lateef Jakande Road, Agidingbi, Ikeja Lagos, as you come your life will never remain the same, Prophet Ogundipe aka Genesis concluded